Last month Danielle Trussoni stopped in Dallas as part of her cross-country book tour for Angelology. Lucky for us, she graciously agreed to this interview.

Part literary thriller, part fantasy, this book has all of the elements of a great story: quirky characters, forbidden love, danger, lyrical language, and atmospheric wonder, not to mention a killer cover. Lucky for us, Danielle agreed to stop by What Women Write. 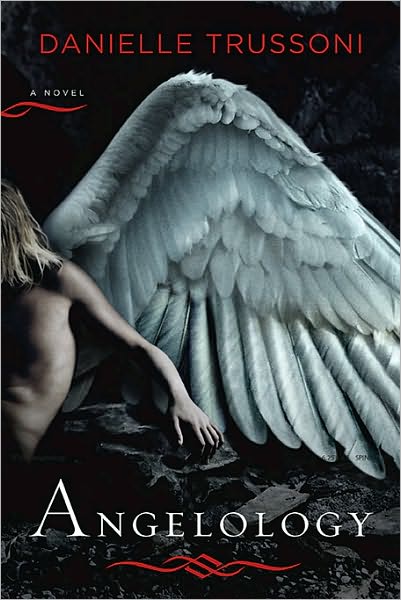 From Publisher’s Weekly:
A covert age-old war between angels and humans serves as the backdrop for Trussoni’s gripping tale of supernatural thrills and divine destinies. Sister Evangeline, the secretary who handles all inquiries concerning the archives of angel arcana at an upstate New York convent, receives a letter from researcher V. A. Verlaine inquiring about an unknown link between the convent and philanthropist Abigail Rockefeller dating to 1943. It turns out that the Rockefellers were interested in a legendary artifact associated with an order of fallen angels. That priceless artifact is coveted by Verlaine’s employer, Percival Grigori, a Nephilim — offspring of the union between mortal and angel parents—who will stop at nothing to retrieve it for the awesome power it will give his race over humanity. Trussoni (Falling Through the Earth) anchors this fanciful dark fantasy to a solid foundation built from Catholic church history, biblical exegesis, and apocryphal texts. Suspenseful intrigues and apocalyptic battle scenes give this complexly plotted tale a vigor and vitality all the more exciting for its intelligence.


Joan: Thanks for stopping by What Women Write! Angelology has received so much positive press (including a fantastic nod in the New York Times Book Review). Did you anticipate the novel would be this big?

Danielle: I hoped it would be big, but one can’t know how a book will be received. The review on the cover of the New York Times Book Review was astonishing. I was thrilled and surprised.

Joan: We’re thrilled for you! Mixing Bible lore, World War II, New York City, Greek mythology and nuns, you’ve created an intelligent, elaborate plot with fantastical characters existing in the midst of real society. I imagine you must have planned out the storyline well in advance of writing. How did you keep it all straight?

Danielle: Actually, I had an overall impression of how I wanted the story to unfold, and a general idea of the Angelologists and their mission, but I didn’t have a strict storyline planned. I’m a more intuitive writer and I needed to play with things quite a lot before finding the structure.

Joan: Well, it was seamless. Your descriptions of the angels, particularly the first time we meet Percival Grigori, are gorgeous. What brought the visual to the page for you?

Danielle: I looked at a lot of paintings and images of angels while writing Angelology. I went to museums and collected books with colored plates. I love Dore and William Blake and the Renaissance painters’ interpretations of angels. I tend to be a very visual writer, but I knew that capturing the physical characteristics of creatures so ethereal as angels would pose a big challenge.

Joan: In addition to the visuals, the characters' names were especially fitting to the novel. Did you settle on names before you started writing?

Danielle: I found names for the characters as I developed them. I like to have a clear picture of the character before I put him/her on the page. The names were especially fun to come up with.

Joan: I found the concept of the adoration chapel interesting and the way you weaved its significance into the storyline clever. Do the nuns of the convent where you stayed practice perpetual praying?

Danielle: I did research at a convent where the nuns have been practicing adoration for over 125 years. The adoration chapel in Angelology is very similar to the one at the convent I visited and the prayer is also really close to what the Sisters were doing. I wanted to make this element of the book as authentic as possible.

Joan: Interesting, no wonder it felt so authentic. What was it like living in a convent for a week? Are there really nuns as young as Evangeline?

Danielle: There were a few young nuns, but in general the Sisters at Saint Rose Convent were older. There is some difficulty in recruiting new members and so there are fewer younger Sisters than there used to be.

Joan: Without giving away the ending, I liked the way you resolved the story and also paved the way for a sequel. You wrote that the next book will be a love story between Verlaine and Evangeline. Will the storyline mirror Gabriella’s?

Danielle: Not at all! Verlaine and Evangeline’s love story is uniquely theirs. It will necessarily be complicated by what happened to Evangeline at the end of Angelology, but it’s clear to me that the next book should be a love story between our hero and heroine.

Joan: Looking forward to reading it! Many of our blog readers are writers. When seeking publication, we are often advised to keep manuscripts below 100,000 words. At 450 pages, your novel is long. Did you get any resistance when trying to sell it?

Danielle: Not at all. I think that there is an audience for longer novels, so long as the length is justified. If you have a 150,000 word meditation on color theory or spend ten pages describing a character’s breakfast choices, then perhaps you need to cut a bit. But if the story plays out over many pages, then length is necessary. Angelology is 170,000 and some readers have told me that they read it very quickly. It all depends upon pacing.

Joan: Excellent point. You mentioned that you wrote your book in 3 ½ years. Do you have the same lead-time for the next one? Will it take less time since most of the research and world building is done?

Danielle: No, I’m trying to write the next one a bit quicker, which I hope will be possible. As you mention, I’ve created this imaginary world in Angelology and I will be able to draw from this in the next book, which is called Angelopolis.

Joan: Great title! Now what’s a question you’d love to answer but no one has asked?

Danielle: Who is your favorite muppet?

Joan: Thanks so much for joining us!
Posted by Joan Mora at 4:00 AM