An Evening with Kathryn Stockett 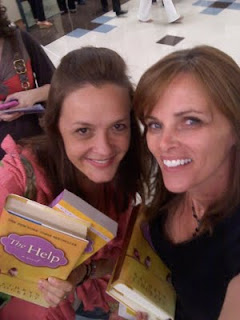 On January 2, 2010, I wrote here about a great debut novel by an unknown Southern writer, Kathryn Stockett. On Tuesday night, in the middle of a week full of work, kids, and general busy-ness, I attended her book signing in Dallas with my good friend and co-blogger Pamela and her delightful mom. It was a full circle, of sorts, for me and my journey as a writer.

By now, everyone knows Kathryn Stockett, the author of The Help. It's been translated into 39 languages, has been on bestseller lists for something close to 100 weeks, and sent a shock wave through the South in its dissection of race, class and women. It broke rules. It shed light on our own failures as a society in 1960s America. And it kept me committed to my own work-in-progress when I truly had no idea what I was doing.

The First Presbyterian Church of Dallas was packed on Tuesday night, women in groups huddled together with Coach purses and perfectly coiffed hair. I swear an aging Miss Hilly--one of the characters in The Help--was sitting two rows behind us. I shifted in my seat before the author began speaking. I was here as a writer, not just as a fan. What would she have to say to this group, who in many ways looked like the characters she had created?

She did not disappoint. She told us of her own journey as a writer. She talked about rejection (60 agents declined The Help before the 61st said 'yes'.) She talked about that crazy tenacity that a writer must have to continue working on a novel just because you love it--because it speaks to you, because it made you homesick for the voices of your childhood.

And she was irreverent, poking fun at her home state of Mississippi, her characters, and herself as a writer. ("Me?" she said at one point. "I'm no expert. I'm just makin' shit up.") She talked about her childhood dreams to become a writer, about the love she had for Demetrie, her grandmother's black maid, and her time in New York during the September 11, 2001, attacks.

She took questions from the audience. A blind women articulately implored us all to listen to the audio version. A fellow-Mississippian extolled the virtues of their state, and at least one African-American woman praised her for telling the story. She answered all of the questions with humor 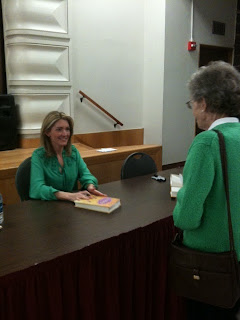 , truthfulness, and an endearing transparency that felt like friendship. By the end of the evening, Pamela and I just knew that she would love to hang out with us, of course, if just given the chance. She made you feel like a friend.

Once we were in line for the book signing itself, they let us know she would not be personalizing the copies due to time constraints. Pamela's mother, who had just flown in from Indiana that day, found a chair while Pamela and I entertained ourselves in line, declaring this the best book signing ever. Once we got face to face with her ("Dang, she's tiny!" I said to Pamela. "Tee-tiny," Pamela answered.) Pamela's mother joined us with her copy of The Help, and we all said our thank yous as the author lifted her Sharpie, ready to sign the next one.

As we walked away, we were quickly called back. "Ms. Stockett wants you to come back," the rep from the Dallas Museum of Art said. And we returned, as giddy as though we had an audience with The Queen. "I'd like to personalize your copy," Kathryn said, not to me or Pamela, mind you, but to Marianne Tooley, Pamela's mother.

We three left in giggles. I was too excited to even get a photograph of Marianne beaming at the author as she asked her name and personalized her copy. 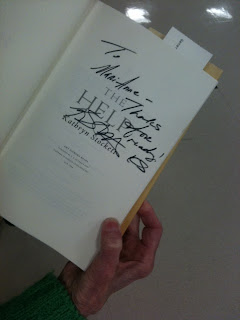 On my drive home, I turned the radio off and drove in silence, thinking about The Help. I thought about my own novel, which I just completed last week--all 99,910 words of it. When I read Stockett's novel, I was consumed with perfection and lost in my own plot line. I wanted it to be right. I wanted it to follow a pattern, I wanted it to have order. After falling in love with The Help, I decided to stop listening to the voices around me that were 'showing me the ropes.' Sure, I didn't know what I was doing. I was writing for the love of it, for the story itself. It was then that I decided not to worry about things that I could not predict or even foresee--things like agents and query letters and the scary and dejecting world of publishing. I decided then and there that I was just going to continue writing.

"Keep writing," she'd said at the beginning of her speech--not to the Miss Hilly's in the audience, I think, but to me. "Keep perfecting it. Make yourself better. Don't give up." I left the First Presbyterian Church inspired--not just by Kathryn Stockett's novel, but by her journey, her tenacity, her humor, and her kindness.

On August 12, 2011, The Help will be released by Dreamworks, and I'll be there, watching it unfold on the big screen. Where will my own manuscript be by then? Will I be brave enough to submit it to agents? Because beyond there be dragons.

I have a feeling I will. What have I got to lose?
Posted by Susan Ishmael-Poulos at 8:00 AM