The Power of Persistence 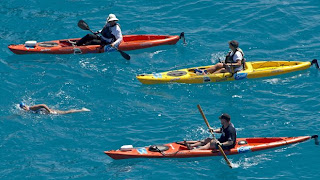 By now, everyone's heard of the amazing Diana Nyad, who swam for almost 53 hours straight over Labor Day weekend from Havana to Key West without a shark cage, becoming the first person to ever do so.
There are so many reasons this feat was incredible, even removing the grueling physical aspects of swimming for 52 hours and 54 minutes from the equation. She was surrounded by deadly jellyfish, the weather and water conditions had to be near-perfect, and most fascinating of all, she is 64 years old.
But what I've returned to over the past few days as I watched her interview with Dr. Sanjay Gupta wasn't her crackled and sunburned skin, her swollen tongue and mouth from the jellyfish mask, or—frankly—even her age. The lasting impression from Diana Nyad's record-breaking swim, for me? She'd attempted and failed the seemingly impossible dream four times before, beginning when she was 27 years old. This-- at age 64-- was her fifth attempt.
It's a great reminder, isn't it, that everybody fails?
Instead of thinking only about success, think about each failure that brings you to your next choice. Should you try again, or quit?
It made my own goal of publishing my first novel seem very small. And with each failure along my twenty-five year writing road I was faced with a choice: keep writing, or quit, knowing that if I quit writing tomorrow, no one would beg me to continue. I'm sure she'd been told for her entire life that her dream was impossible, yet that didn't extinguish her passion for attempting it again, and again, and again. 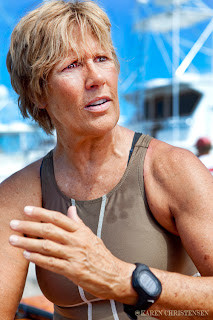 Which leads me to my next thought:
Is the passion that drives Diana Nyad to swim the same passion that burns in all of us?
Some of us change our dreams as we age, or transfer our dreams for ourselves into dreams for our children. Many, many of us simply quit: too tired to continue at something that feels impossible.
But what if we don't quit?
I promise this: none of us will swim from Havana to Key West—that's Diana Nyad's dream. Yet whether your dream is a writing career, a college degree, a promotion at work, or running that 5K, take Diana's words to heart:
We should never, ever give up
You're never too old to chase your dreams
It's never a solitary sport, it's a team

Posted by Susan Ishmael-Poulos at 1:00 PM