NaNo is NaNot for Me

Pamela, Julie, Elizabeth and Susan have all blogged recently about NaNo (short for National Novel Writing Month). Most have not committed to the full 50,000 words, of course, but they have all made ambitious word count goals and are well on their way to meeting them. Even Joan, who has not publicly weighed in on NaNo, has her own private goal and diligently worked toward it on our recent writing retreat near Glen Rose, .

When Julie, Pamela and Joan brought up the idea of doing NaNo as a group, perhaps even posting daily word counts on our blog to hold ourselves accountable, my first instinct was panic. The Bullock household was on the tail end of our own private Swine Flu epidemic, the cats had ringworm, the dog had intermittent bouts of explosive diarrhea from raiding the kitty litter, my husband’s travel schedule was insane, we would be out of town for a week, and then, of course, there is the issue of my office. I produced maybe five thousand words worth keeping in October. NaNo purists would jump on my phrase ‘worth keeping’ and tell me that’s the crux of my problem. NaNo is not about achieving perfection, but about forcing yourself to forge ahead even if the words that came before are nothing but literary vomit.

I’ve written a polished novel in three months before, so it’s not that I can’t produce words quickly. It took me a grand total of ten minutes to compose a 525 word excuse about why NaNo was NaNot for me. Here are some of the highlights (with a few extras added in for good measure):

One: I would kill myself writing 50,000 words in a month only to spend the six months after that completely rewriting 49,999 of them. Twice. I’d have plenty of time to do it because my family would no longer be speaking to me.

Two: You are supposed to start a new project for NaNo. I would rather hack off my own arm than abandon a story I’ve lived and breathed for the last three years.

Three: Have I mentioned my office?

Four: Everyone in my family expects to eat and have clean clothes to wear. 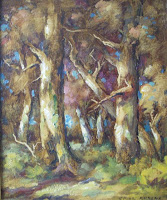 works well for those writers who like to write first and edit later. I write like a painter paints – in layers. Start with a sketch, add a wash or two, build up details here and there, etc. If the composition as a whole doesn’t work, I’m not going to waste my time crafting a scene that will only be cut when I address the bigger issues.

Six: My protagonists are both artists, so writing like a painter paints can only be a good thing. My ‘comfort zone’ works splendidly for this project.

Seven: The Oak Lovers is, essentially, a true life novel. Research is on-going and I have no control over when new details will fall in my lap. Just two weeks ago I heard from a distant relative of Carl Ahrens’ first wife Emily, and the information and photos she possessed clearly spelled out a close relationship between Emily and Carl’s cousin, Eleanor. This completely changes the dynamic between Carl, Emily and Eleanor, which affects at least four early chapters and may come in to play later in the book. It must be fixed before I get there. 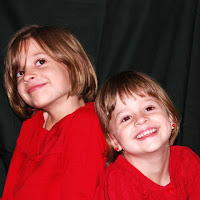 Eight: I have two small children. I don’t want the eldest asking me why I spend more time with my dead great-grandparents than with her.

Nine: Writing a chapter takes little time but requires me to disengage from my life and take up temporary residence in 1909. I’m tweaking dialogue while driving Ashlyn to school or composing one of Carl’s clever insults while listening to Sasha talk about her day. Something as disruptive as a phone ringing can make me lose focus for hours. Everyone who lives with me knows I’m not 'all here' when I’m working. It’s mentally exhausting to live trapped between centuries and I always go into it with a mild fear that I’ll be changed in some permanent way. If I spent a month moving directly from one chapter to another without emotionally decompressing, the men in white coats would come to cart me away by the end. 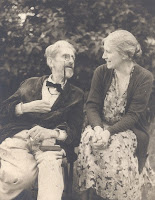 ave never experienced the kind of all consuming love Carl and Madonna felt for each other and I wouldn’t want to. It took nearly a year and dozens of drafts of the early chapters before I learned how to mentally fall in love with one or the other of them for every scene. I’ve fallen for characters before, of course, but not ones who were real people. It’s uncomfortable, not because their blood runs through my veins, oddly enough, but because the feelings come from someplace outside of me. They are an affliction as much as a gift, and I always feel a bit lost while under that spell.

I have nothing but respect for all the writers who have committed to NaNo. I’m thrilled for my blog partners and the satisfaction they receive from meeting their goals and breaking out of comfort zones. Do I wish I were among you? Not particularly. I’m perfectly content with the high quality 3,000 words I’ve tallied since November 1. I’ve written new material, and in the end I suppose that’s all that really matters.