It’s been said that you don’t know someone until you live together. I’ll go one further: You don’t know someone until you write a book with her. Pamela and I just finished up an edit on CENTER COURT SEATS AND A PAIR OF JIMMY CHOOS, a story we co-wrote. Now we feel the story is tighter and a much better read. I won’t share the circumstances that instigated our writing that particular book (because then I’d have to kill you), but I will offer tips we learned by co-writing fiction.

First, choose a partner with whom you know you can get along. Most importantly, choose someone you respect. If you were friends before you became writing partners, remember the friendship comes first. My feeling is, and I think Pamela would agree, material things are not more important than people. Ever. The first day, we both concurred that if writing together caused us to not get along, we’d quit without a second thought.

Make sure you share the same vision of the project. What’s the genre? (Confession: this one took us a while!) Will it be funny? Will it be tragic? What’s the theme? Do you agree on the plot? The characters?

Prepare an outline. When you’re co-writing, it’s best to set out ahead how the novel will unfold. Sometimes I’m a planner, sometimes a pantser, but when we write together, we prepare a timeline and an outline, both of which can be modified. Staying well organized and focused is essential when someone else is writing beside you.

Agree on deadlines. A week to write a chapter? Two days to edit? If one person is consistently on time and the other late, frustrations can set in. Life happens and we all have other commitments, but if you can’t meet a deadline, be upfront about it. In our case, we both write solo projects and take on freelance assignments. Being sensitive to each other’s schedules is imperative. Now that CENTER COURT SEATS is finished, I think we’d both agree, we’ve pushed our second story, FIVE DAYS TO KILL BOB, to the back burner too many times. In fact, Pamela says poor Bob has been waiting so long, he probably figured out his fate months ago and fled the country.

Agree on a method of final say. In our case, since our books so far have featured two sisters, we each write one voice and have the final word on our own character’s lines and behavior. But be considerate. If one person feels strongly about something, give on it. Just like in any relationship, pick your battles. Just last week, we texted back and forth several times about a line of dialog I loved, but she wanted to kill. The last two messages read: It’s your character, if you love it, keep it. My response: Thanks, partner. Secretly she’s probably hoping an editor will make me change it!

Keep your voice true to the book you’ve chosen to write. Even though our styles may be different, we both agree on our novel’s tone and do our best to stick with it. As co-authors, we tend to think and write as one, even choosing a penname as though together we are a third person. Our story is hers, not mine or Pamela’s. 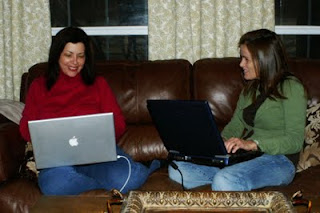 Stay positive (i.e. don’t both get down at the same time). Along the way, both of us have been discouraged, whether about a scene we had trouble writing or by a rejection of the full manuscript—this one or a solo venture. But we’ve avoided the pitfall of pulling the other one down. It helps that we’re both fighters and determined to never give up.

Choose a method that works for you. We met in person to plan the book, agreed on characters, mapped out a plot. Pamela wrote a chapter and emailed it to me. I edited it with the help of the Track Changes feature in Word and emailed it back. As noted above, she had the final say on whether to go with my changes or keep her own. We’ve edited each other for so long, our styles seem to have merged, at least for our co-written projects (and, um, this blog post). Confirmation comes when someone reads the story and asks, “So which one of you wrote which part?”

Record your intentions for the working relationship. You'll likely sign a contract with an agent, definitely with a publisher, so it's best to put down in writing your view of the arrangement, either for a particular project or several. Even partners with the best intentions sometimes have misunderstandings that could have been avoided if discussed up front. Are you 50/50 partners? What's your succession plan if one of you backs out or dies (sorry, worth a mention)? Can one of you write another book using the same characters? We found a template online that worked for us.

Today we will meet and together read through the final version before we send it out again. We’ll let Ghost Reader serenade us for a few chapters (and pretend it’s our audio book), then we’ll split the rest of the book, scouring for typos and checking for continuity. Perhaps the next agent will love it as much as we still do, but if not, we’re confident someone will. We’ve fine-tuned a system that works, and plenty more books await.
Posted by Joan Mora at 5:00 AM