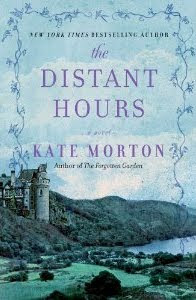 I’m looking forward to an upcoming Q&A with Kate Morton because I’ve just finished her most recent novel, The Distant Hours. Ms. Morton wrote, “The novel brings together many of my favourite things. A crumbling castle, a family of sisters, a love of books and reading, the haunting of the present by the past, thwarted love, ghostly shivers, mystery and memory and secrets.”

If these are also your favorite things, you’ll be crazy about this book, or in fact, any of her novels. The Distant Hours builds slowly, unfolding with each intricate bit of plot. But the suspense grows and to the last sentence, the reader is caught up in the mystery of a daughter trying to understand her mother, three eccentric sisters trying desperately to protect their castle and themselves, a family cemetery, and love forsaken.

From Publisher’s Weekly, Starred Review. A letter posted in 1941 finally reaches its destination in 1992 with powerful repercussions for Edie Burchill, a London book editor, in this enthralling romantic thriller from Australian author Morton (The Forgotten Garden). At crumbling Milderhurst Castle live elderly twins Persephone and Seraphina and their younger half-sister, Juniper, the three eccentric spinster daughters of the late Raymond Blythe, author of The True History of the Mud Man, a children's classic Edie adores. Juniper addressed the letter to Meredith, Edie's mother, then a young teen evacuated to Milderhurst during the Blitz. Edie, who's later invited to write an introduction to a reprint of Raymond's masterpiece, visits the seedily alluring castle in search of answers. Why was her mother so shattered by the contents of a letter sent 51 years earlier? And what happened to soldier Thomas Cavill, Juniper's long-missing fiancé and Meredith's former teacher? Despite the many competing narratives, the answers will stun readers.

A quote I read on Ms. Morton’s website really struck me. She wrote, “I prefer to write for one person whose tastes are exactly like mine, instead of imagining millions of readers, which would be ‘creatively crippling.’ ”

Out of all the advice on writing, this seems about as sensible as it gets. The interesting part is that her books are not only intriguing to her, but they are huge sellers, in her native Australia and worldwide.

Fellow writers: Do you write with your own tastes in mind, or do you write for others? We’d love to hear your thoughts.