The Forest for the Trees 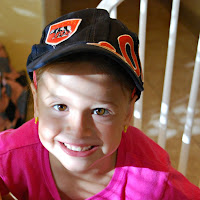 I started writing The Oak Lovers (then called Knight of the Brush) around the time of my youngest daughter’s birth. As you can see by this recent picture, that was quite some time ago. This snail’s pace is rather alarming considering that my past two novels were finished and ready to submit within a year. I can be prolific. Really.

Writers’ block isn’t the problem and the delay certainly doesn’t stem from lack of enthusiasm for the story. My biggest obstacle may be just the opposite. I know far more about Carl and Madonna Ahrens than I could fit into 100,000 or even 200,000 words. I floundered for years because I wanted to tell the whole story.

Over the last few years I’ve learned to see the forest for the trees. While still sometimes painful, I can recognize and slaughter my “little darlings” to make room for elements of the story that make my novel about more than a neglected artist and his muse. Many Canadians have never heard of Carl Ahrens, but I would be hard pressed to find one unfamiliar with William Lyon Mackenzie King or the Group of Seven. Carl was a friend of the former and an enemy of the latter. Better to play that up and leave out the time he made maple syrup with his kids, no matter how sweet the story. Most Americans know about the 1906 San Francisco earthquake. Carl and Madonna saw the damage from it first-hand. That’s surely more exciting than the summer Carl spent as a game warden in the Kawartha Lakes region. (No, I don’t expect you to know where that is.) Arts and Crafts aficionados are a passionate bunch, and will likely be thrilled that Carl and Madonna’s courtship takes place at Roycroft and that Elbert Hubbard makes several appearances. Even there I sacrificed Carl’s friendship with Alex Fournier and W.W. Denslow, fearing that few people would know who they are.

It’s been challenging to take a highly personal story and be objective enough to find the marketable nuggets, to take those nuggets and transform a life story into a believable and compelling plot. Forbidden love, betrayal, tragedy, adventure – these are things that keep people reading. I’m in the homestretch now and I hope by the time I finish, I’ll have delivered all that and more.

I’ve often wondered how other authors who write about real people decide what to put in and what to leave out. (If you’re one of them, please chime in!) If you know of authors who have successfully transformed a life story into a page turner, please show them some love and tell us about it.
Posted by Kim Bullock at 5:00 AM