The Gift of Imagination

My daughter arrived at the park with a plan: she wanted to have a caricature made. "I'm not sure what I want to be in it," she said, but she'd made sure her stash of cash was enough to cover the price of the picture. We said we'd spring for the frame, a gift to her. 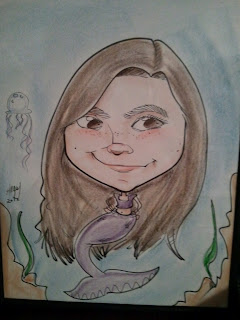 We waited until our second day at Sea World to scope out the artists. By then she'd settled on being immortalized as a mermaid. "Because they live in the water, and I used to be obsessed with Ariel, remember?"

The first booth had two people drawing, and none of us felt they really caught the essence of the model before them. Back to the booth nearer the front gate, and there we found the guy who we all believed would do the job well. The ponytail holder was yanked out, a quick brush through the windblown hair, and she was ready. Fifteen minutes later, the guy turned the drawing around for her and she couldn't stop grinning. In fact, both kids were so pleased with the picture that my son stepped up and asked to be drawn, too. No mermaid nonsense for him, though.

Both my kids are big readers, and lately most of my son's book dollars have gone toward art books. He's taken up drawing with a vengeance, and he's gotten really good. He concerns himself with details of shading and shadow, with light and its sources. "Could you draw in the sword from the stone?" he said. "With the light source from the bottom." Not something that would have occurred to me, but the Sea World guy seemed pleased and double checked when it was time to pick up the colors. 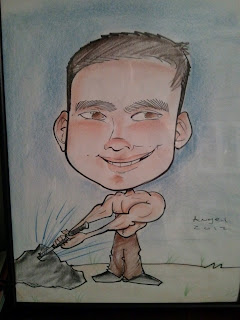 Side by side, the pictures looked pretty good. One is all whimsy, just like my girl, and the other is myth carried over into history. King Arthur might really have been. Ariel, not so much. But both are informed by stories, and while the mermaid might have started with a movie, that spurred the collection of books about fairies and mermaids and other fey creatures that she's now outgrown, but revisits in her imagination. My son's reading includes heavy doses of fantasy, both classic and fresh off the presses, and I'm pretty sure that includes The Once and Future King as well as Eragon and plenty written in between.

I don't know if my reading, my husband's reading, is why our kids read. It's a joke in our family, trying to decide who is the biggest bookworm. But it really doesn't matter: I'm just glad they do. Not because, as people are wont to say when it comes up that we are big readers, "Oh, that's so good!" in a tone suggesting we possess some special virtue that they often go on to confess they lack.  While I agree, it's good that we read, it's not because the act is a virtue unto itself. It's good because it spurs the imagination. Because it helps my kids travel into a place in their minds where being a mermaid or an inevitable king is possible. Because with reading, anything becomes possible. And that is the real gift, any way you frame it.
Posted by Elizabeth Lynd at 6:00 AM