A review of Ann Weisgarber's The Promise 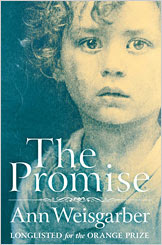 One of the perks of having a second English language publisher for Calling Me Home (Pan Macmillan in the U.K.) is getting occasional advance review copies—or "proof" copies, as they call them in the U.K.—from my editor there. Last year, I had the privilege of reading an early copy of Carol Rifka Brunt's haunting novel, Tell the Wolves I'm Home. My mom, who reads everything I read and a whole lot more, said it was one of her favorite books of the year.

Recently, my original editor at Pan Macmillan moved to a new publishing house and Calling Me Home was taken over with great enthusiasm by editor Sophie Orme. In our process of getting to know one another, she discovered I had an interest in novels by Ann Weisgarber, a fellow Texas writer. I read The Personal History of Rachel Dupree in 2012, and was blown away by this intense, moving story. It was shortlisted for the Orange Award for New Writers and longlisted for the Orange Prize in the U.K., and was chosen for the ABA's Indie Next List and Barnes & Noble's Discover program when it released here in the States. I devoured it and couldn't wait to read something new from Ann Weisgarber. Sophie endeared me to herself immediately when she put a proof copy of Weisgarber's new novel, The Promise, in the mail.

I read it over the holidays in whatever moments I could steal away from all the hullaballoo, and once again was startled and drawn in completely by this novel—most especially by the voices, exactly as I was with Rachel Dupree, a young African-American pioneer, in the previous novel.

The Promise is the story of Catherine Wainwright, a pianist who flees her Ohio home in disgrace, impulsively accepting the proposal of the man who worshipped her from afar when they were young. Oscar Williams is still rough around the edges, but he's stronger and surer of what he wants than Catherine expected when she agreed to marry him. He lives far away in Galveston, Texas, where he has built a dairy farm on "the ridge" far "down the island."

The Promise is also—and maybe more importantly—the story of Nan Ogden. Nan has been Oscar's housekeeper since his first wife died tragically. Upon Bernadette's death, Nan promised to always watch out for Andre, Bernadette and Oscar's only child. But there's more to her story: Nan harbors secret feelings for Oscar.

The story alternates between the distinct voices of Catherine—refined and stunned by her new life—and Nan—practical, realistic, and completely unable to deny the pull of her promise and her feelings.

It feels like a quiet story at first (intentional, I believe!). With careful and deliberate language and plotting, Weisgarber develops her characters through loaded interactions between Catherine and Oscar, Catherine and Nan, and Nan and Oscar, as well as Catherine's tentative struggle to become a mother to Andre.

But then the story marches toward the historic 1900 Galveston storm, the worst natural disaster in twentieth century American history. By the time I arrived at the second half of the book, through the warning signs and eventual arrival of the hurricane, my heart literally pounded as I read of Oscar's attempts to secure his animals and home and the people for whom he feels responsible. I stopped stealing bits of time and had to demand the few hours I needed to finish reading The Promise and learn what its heart-wrenching conclusion would be.

It's not an easy story to read (again, like The Personal History of Rachel Dupree). If you are easily frightened or like stories that tie up things with a pretty bow, you probably won't like it. But if you're like me—a reader entranced by realism, even when packaged in tragedy—you'll likely find it impossible to tear yourself away from this story for long until you've finished.

I don't know when The Promise will be published in the United States. U.K. readers are lucky to have it nearly at hand with a March 14, 2013, publication date there. In the meantime, it looks like U.S. residents can pre-order from sites like Amazon UK for about the price of a purchasing a hardcover here, including the international shipping.

Disclosure of Material Connection: I received an advanced copy of the book mentioned above gratis. Regardless, I only recommend books I've read and believe will appeal to our readers. I am making this statement in accordance with the Federal Trade Commission’s 16 CFR, Part 255: “Guides Concerning the Use of Endorsements and Testimonials in Advertising.”