A yoga studio I like just moved locations, and they offered a free class the other night. Being me, I cannot turn down a freebie, so of course I was at The Mat. Turned out they brought in a sort of rock star of a yoga teacher for the event. David Romanelli is a guy who combines the irresistible combination yoga and chocolate. And, yes! there were three chunks of chocolate awaiting the inhabitants of the packed room when we finished savasana. Delicious, of course.

It was a good class, but for me, it was more than that. It was a story. As we flowed through poses, he told tales both personal and inspiring, and when my sneaky brain refused to simply empty, I thought that it felt almost like a conversation (even if I was uncharacteristically silent). I enjoyed the class tremendously, and left feeling stretched in both mind and body. 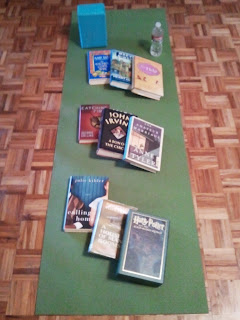 Yoga is all about being in the moment, in the room, on your mat, right now. Letting go enough to let something bigger happen. To me, it sounds very much--and is very much--like writing when it is going really well. The writing takes over, the brain still there, yes, but in a sort of dinosaur way, there to access if there is a struggle for a word, but often almost a biological element necessary for the real work to take place. For me, and I know I'm not alone, when I'm on a writing roll, it almost seems to have less to do with me than it does with the magic or the muse or whatever we choose to call it, but certainly something somehow greater than our fingers clicking over keyboard or scratching a blue stick along a piece of processed tree. When yoga is going well, it's less about what is in my mind, or how my body looks in a pose, and more about how I feel, inside, eyes closed, seeking balance or sensation or peace.

And it's always been about story to me. That sneaky brain I mentioned that doesn't want to shut down when it's supposed to? A good portion of the time it's seeking stories, inventing or wondering about the woman in the corner in the grandma pants and marathon t-shirt, or the Renee Zellweger lookalike who usually shows up about three minutes late, who I am convinced has a fascinating and lucrative career, or the guy with the tiger tattoo and perfect teeth who has been known to watch a ballgame on his cell phone during class. (Okay, someone told me that one, I actually wasn't there that day.)

But I think this was the first time I attended a class that was intentionally all about stories. And I liked it, enough that when he mentioned he was working on a book coming out next year, my sneaky brain perked up and knew I'd have to ask if we could interview him for the blog. (He said yes, so look for it next spring.) Not because it's a book, but because for him, and for me, yoga is a story. Everything is a story.
Posted by Elizabeth Lynd at 6:00 AM