I am, and always will be, a student of the written word.

In the past year, I've attended more writing workshops and conferences than ever, and have taken time for myself on personal retreats both alone and with other writers. I've brainstormed with poets and novelists about craft. I'd like to say that by now, I know a little bit about the basics of fiction: character, craft, plot, theme, and creating suspense in the shape of beautiful language.

Yet this past week, pulled by a strong desire to know more, read more, and to write more, I found myself in the 800 section of my local library, skimming the spines of writers and critics who once again attempt to answer the questions Why do we write? And How can we write even better?

Now: I will tell you that the best advice to writers is simply to write, not to read about writing. (My second piece of advice is that in order to write good fiction you must also read good fiction.) Yet as I've continued my path down the student's road, I've found that all of the genius voices in literature were not born of genius alone: they were shaped and molded and wrought onto their pages with style, art, and a deep commitment to the process. 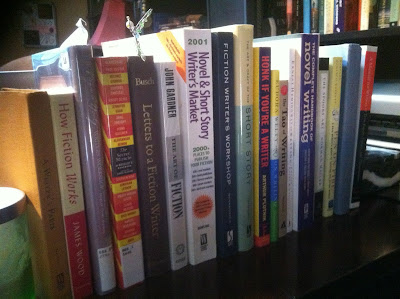 So for today's Friday round-up, I thought I'd share both my own collection of books on writing and the three I just picked up at the library. Enjoy!

Posted by Susan Ishmael-Poulos at 3:00 PM