The other things we do

We sure talk about writing a lot here at What Women Write. I guess that makes sense. But today I thought I'd talk about something else! I think as a writer it's extremely important to develop other passions and interests. This isn't an original idea. I've even blogged about it before, and most writers will tell you the same thing.

It's good to get out in the world and do something different now and then.

It stretches our brains, makes us think about new things and different things besides the constant world of characters, setting, and plot, where we often dwell inside our brains.

Do you love to run? It's not just good exercise, but good thinking time. Work toward a marathon, or a half marathon, or even a 5K! I'm very proud I've worked up to running about 30-40 minutes on my treadmill after never being able to run much in my life. Outside I can't run more than half a block without feeling like my lungs are going to pop (mild asthma, maybe?). Since I started running inside, I've been amazed to discover I can run -- and much longer than I ever dreamed! Sometimes I even just run in circles inside my house. Trust me, this works, though it probably looks pretty ridiculous from the outside looking in.

Do you love to craft or scrapbook? I'm severely scrapbook challenged, but I do enjoy making a crafty thing now and then. Remember my posts about Wine 'n Whimsey last year? I've been missing those evenings, and I learned from experience it's good to confine my crafting ventures to that 2-hour window. When I try to craft from home, I invest too much money in supplies and dwell too much on perfection and rarely finish much. Remind me to tell you the story about the wine bottle chimes I made for Christmas gifts last year ... (ahem, a few are still sitting in a box unfinished on my dining room table).

Do you love taking photos or painting or drawing? Make some time for doing those things.

One of my absolutely favorite things in the world is going to movies.

I especially love quirky or fairly undiscovered indie films, but I also enjoy getting the scoop on bigger films that aren't in wide release yet. It's film festival season in the DFW area, and my husband and I start scoping out the websites and schedules long before the Texas summer heat finally retreats each year, planning and talking about which films we're going to try to see and how many we think we can cram into a weekend. I mean, you can only watch so many movies in the space of three or four days without going a little soft in the brain, right? We also love the unique experience of seeing a director or actor stroll to the front of the theater after the film for a Q&A as we've been able to do for several films at the annual Lone Star Film Festival.

Last weekend, we attended one of our favorite festivals -- Chris Kelly's Modern Cinema Festival at the Modern Art Museum of Fort Worth. In previous years, we've had the privilege of seeing films ahead of wide release such as 50/50 that we loved, and some we weren't quite so sure about (E.g., A Dangerous Method).

Each year, while I'm scanning the schedules initially, I often think I'm not too interested in many of the films. At first glance, they might seem like something I just wouldn't ever think of seeing, or they might be on a topic that doesn't interest me, or maybe even are filmed in a country I've never had the desire to visit, even in a film. So, we say, oh, should we get passes or just take our chances on sold-out screenings by buying individual tickets? We waffle around, but usually, and often the day or two days before the festival, we convince ourselves to buy the passes, and while we're at it, buy the annual membership to the Modern, and heck, throw in the Reel People membership while we're at it so we can get discounts all year round to the Magnolia at the Modern films.

And then the challenge is on. And suddenly, we are checking out the trailers for the films, looking at scarce reviews or social media posts, or checking to see what else the actors have been in.

And suddenly, we're planning to watch as many of the films as we can stay awake for.

This year we managed a record six. I really think it would have been all eight scheduled had I not already committed to meeting with a book club on Friday evening.

Not every single film was a hit for me and/or my husband this time, but we enjoyed several very much -- especially the funny and bittersweet A.C.O.D. (adult children of divorce), a breathtaking and heartbreaking Belgian film titled The Broken Circle Breakdown, and a sweet (and sometimes not sweet) look at marriage from the viewpoint of a couple struggling to regain their mojo after many years of marriage in Le Week-End.

We might not have stayed for the final screening Sunday afternoon after Le Week-End, because le weekend had already been long, and we were exhausted and happy and overfull.

However, things were running a bit behind, which mean the very last film would start almost immediately after credits for Le Week-End rolled. We went to the lobby to stretch. I said to my husband, "Let's sit at the back, and then we can leave if we want to."

After all, this movie was a documentary -- never my favorite genre. And it was about India. I've never felt compelled to visit this country, though I liked 2011's The Best Exotic Marigold Hotel movie immensely. I have a dear online friend from India, and though I have always enjoyed seeing her posts and pictures, that was close enough for me.

The topic seemed interesting, but I just wasn't sure it was interesting enough to sit for another hour and a half in this particular theater, which is not your regular cushy stadium style set-up. So we wandered back in and plopped down in the very back row, which happens to have extra legroom, too, and prepared to be semi-engaged for a long as our tired back ends could take it.

It turns out we stayed for the whole thing. And wow, am I ever glad we decided to hang around. I have never been as emotionally wrung out after seeing a film. And it was not all BAD emotion. The film was extremely sad in places, but over-the-top JOYFUL too. I laughed and laughed, even while I cried and cried. Moreover, I have never, ever seen my stoic engineer husband as affected by a movie as Todd was. On our way to our car after the screening, I struggled to control actual sobs, while he was speechless and I could tell he was struggling to contain his emotion, too.

Here's the blurb, from my perspective:

A young man, disillusioned and confused about his purpose in life, goes on a trip to India and while he's there, he happens to visit a shelter for children and mothers who are HIV positive -- something that happens in staggering numbers in third-world countries. He doesn't even like kids, but something about his visit draws him back, and he ends up moving to the nearby village to volunteer and be with these children as many minutes of the day as he can. He falls in love with them. He is back and forth between the U.S. and India for visa renewals, and feels like a fish out of water whenever he's "home" in the U.S. This place and these kids have become his home and his family.

I shared all this to say two things:

First, following some of your other passions beyond writing can have such a good effect on the writing itself. You learn new things, see new things, find new worlds and new ways for your characters to interact.

But you might even find yourself suddenly with a new world view as a result. 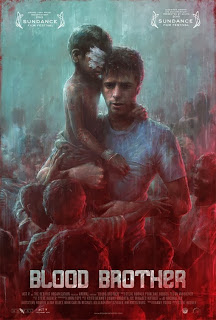 This was the case for me after watching the film Blood Brother, which won the 2013 Sundance Audience and Grand Jury awards for a U.S. documentary.

Suddenly, I am not so sure I will never visit India. And suddenly, children who are HIV positive aren't just random statistics across the world. They now have names I know. Surya. Anitha. Vemathi. Some who are no longer here. And the movie didn't just make me want to pull out my credit card and send the organization ten bucks. It did something to me I don't quite understand yet. Something that is making me think long and hard about my own purpose and investments of time and money. It will be interesting to see where I go with this. Somewhere, I hope.

Second, I want to invite you to look at this website, watch the trailer (and never imagine for a single moment that the extent and depth of what you will see in this film can even be touched on in this two minutes), then see if there's a screening somewhere near you in the next few months. I kind of want to lock the politicians in DC in a room together for the screening there tonight. I couldn't detect even a hint of political propaganda in this film, by the way. I think you might be touched as deeply as I was, and as Todd was, when we randomly (or maybe not) decided to give another 90 minutes to doing something we love to do anyway -- even though we were tired.

What are you doing ... besides writing?
Posted by Julie Kibler at 6:00 AM