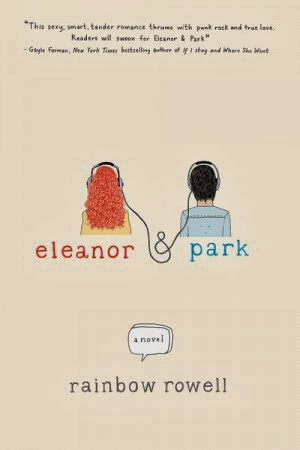 This week, I've been doing something I never, ever, ever, ever do. Or at least not since I was kid, when I did it all the time because I didn't think I'd ever run out of time and there seemed to be a limited number of books.

Earlier this week, I'd finished whatever book I was reading (I honestly can't remember what it was--scary, and that's going to bug me!), and was hunting around on my iPhone ebook apps, trying to decide on something new. But something else caught my eye. I decided I'd -- just for a few minutes -- go back and read part of Eleanor & Park, by Rainbow Rowell. It's young adult fiction, which I hardly ever read, and that makes the next part even harder for me to believe.

Instead of spending just a few minutes on the first chapter, or scanning here and there, I got sucked right back into the story of Eleanor & Park, and I'm almost finished reading it for the second time.

And guess what else? It's taught me a few lessons about what makes a good story and why someone would want to read a story more than once.

I've received flattering emails from readers since Calling Me Home released last year, and sometimes the sender mentions they've read it more than once, or plan to buy it even when they checked it out from the library so they can re-read it when they want to. One record-setting reader told me she'd read it three times that week. I was blown away. I thought, "I never re-read books. Do people have time to do that? Why??!! There are ... SO MANY BOOKS, SO LITTLE TIME."

Finding myself in that situation this week, I had to analyze it. If you know me well, I'm sure you're not surprised. I like to analyze everything, sometimes to the complete annoyance of my family and friends, especially my long-suffering spouse, not to mention my wonderful literary agent.

Here's what I came up with.

Three reasons why you'd re-read a novel, and specifically why I have not struggled to re-read Eleanor & Park at all, even though I never, ever re-read books:

Three things I learned re-reading Eleanor & Park:
I'm so glad I took the time and jumped in when there were loads of other books I haven't read yet. I feel like there are many more lessons here. Maybe you know some of them.

Readers, why would you re-read a novel, and what have you learned doing that? Which novels have you read more than once?