The Art of Reading Banned Books

(This post is about both parental choices and school library choices for book restriction.  I believe that they are two different things, and am in favor of parents making the best decisions they can regarding what their children read, watch, and listen to, based on what is both age and content appropriate for their family.)

Growing up in the '70s in my Kentucky hometown, the city library was located one block north of my house in a brick, two-story former home. Two eucalyptus trees stood in the front on either side of a sidewalk leading to a wide front porch. My friend Hunter's grandmother lived in the house to the left, and my friend Rene's father's dental office was in the house on the right. My church, the Mt. Sterling First Baptist, was five houses east of the library and my elementary school was three blocks north.


Because of this configuration, I spent a lot of time walking this triangle of influences: the church, the school, and the library. Downtown was a few blocks away, and friends' houses were scattered in between. I spent a lot of time in that tiny library, and developed my love of books early.

My parents were teachers, and were very busy. I'm not sure if they kept my reading unrestricted because of their own love of books or because they were too harried to worry about my reading habits, yet I have no memory of ever being denied a book. My friend Bess's mother, Mrs. Stephens, drove the bookmobile, and I had free run of the small city library. I don't remember having a library card, but why would I need one? They stamped the due-date in the back of the book and everyone knew everyone else. It was that simple.

All of that brings me to this point: Fifth grade, Judy Blume. If you are a child of this same era, you may know the book title I'm about to say: Forever. 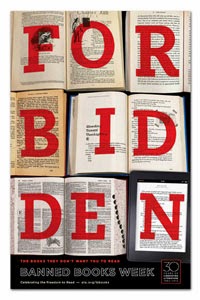 Forever was published in 1975 and deals with the theme of teenage sexuality. Katherine and Michael fall in love, decide to make love, and Blume writes the intimacies of their relationship in exquisite detail—exquisite, especially, to a gaggle of giggling eleven and twelve year old girls.

I'd heard about this book but couldn't find it at our little library. (It probably wasn't carried there, but I am positive I wouldn't have had the courage to ask Mrs. Stephens for it, anyway.) On a rare trip to Lexington—the big city—Mom and I wandered into a WaldenBooks and I found a paperback copy. How could I ask her for this treasure? I mustered the courage, and somehow, she simply said yes.*

I spent the latter half of fifth grade huddled with my girlfriends on the playground reading passages from this book. Today, I saw the statistic that Forever is in seventh place of top 100 banned books of all time.

Books—magical books. My entire life, they've been a constant for me. When my daughters blossomed into readers, I decided to allow their reading to be as unrestricted as possible. When they were in elementary school, I attempted to read everything my older daughter read first, in case she had questions, yet I quickly found out that I couldn't keep up with her.  I decided to simply let her read. Because of that decision she and I have discussed race and sex and politics far more than I ever could have anticipated. For us, it was the best decision. Now fifteen, this daughter reads widely, thinks independently, and talks to me about whatever issues she's interested in. I credit that, in large part, to her reading habits.

Last week, when Highland Park ISD in Dallas announced several titles be moved to a restricted list—including some wonderful books I can't fathom restricting for any reason (Jeannette Walls' The Glass Castle and Garth Stein's The Art of Racing in the Rain) my older girl and I had a conversation about book banning. She's a big fan of The Book Thief, by Marcus Zusak, and the scene of book burning by the Nazis made an impact on both of us. She immediately connected book banning to book burning. How could the wealthiest school district in Dallas liken themselves to that kind of restriction of free speech, she asked me? And—pray tell—why?

My answer is the same one for those who would burn books—it's because information can be dangerous.

Was it dangerous for me to read Forever at the early age of eleven? Is it dangerous for a teenager in Highland Park to read The Glass Castle? Or is there a greater danger lurking akin to the 'danger' of reading about democracy in an autocratic state?

Therein lies the role of both the parents and the school systems to make choices, and I can't say that those choices are always easy to make. Just be cautioned: banning something is the quickest way to spike a teenager's interest in a book. Opening discussions about topics is a much more stimulating way to encourage your child to think than banning them from exploring topics you might not feel entirely comfortable with. For me, the freedom to read was one of the greatest joys of my childhood, and I see that same love for books shaping my daughters' lives as well.

(*Sidenote: I called my mother this morning, now age 72, to asked her if she remembered buying me Forever in 1981. I was curious: was it a deliberate purchase that we never spoke of, or was it just another book to her? She laughed when I asked her, and had no memory of the book whatsoever. Perhaps that's for the best.)

Posted by Susan Ishmael-Poulos at 11:30 AM