By Kim
The idea that I was meant to be a writer came to me as a jolt – literally. I was eight years old when my parents located my grandmother’s childhood home, an old stone farmhouse in Galt, Ontario, Canada. Listening to the owner reminisce about his boyhood encounters with a poor starving artist (my great-grandfather, Carl Ahrens) and his pretty daughters (my grandmother and great-aunt), I learned much of the art my parents owned had been created in that very room. With threadbare carpeting and ugly faux-wood paneling on the walls, it hardly looked like a space to inspire an artist. I fought the urge to blurt out, “Why did you ruin a perfectly good studio?” The words not only would have landed me in a great deal of trouble, but they made no sense. I had no idea what Carl’s studio had looked like.

I had other strange urges as well; to pull up a corner of carpeting to see if the wood floors were still there underneath, to run outside and hug a gangly looking elm tree that waved at me through the window, to seek out my grandmother’s old bedroom. One impulse I could not resist: As I left I touched the outside stone walls.

I felt an electric current course from the stones into my hand – a feeling I’ve never forgotten. At that moment I knew two things: I was going to write a book someday, and my grandmother was with me. We later learned she had passed away while we were at her old house.

I imagine every creative person, whether their craft is writing, painting, dancing, or quilting, has a place that inspires them, a place where the muse speaks freely. For Carl Ahrens it was the forests of Waterloo County, Ontario. I knew I must experience some of the places he held sacred in order to write his story in the way it was meant to be written. I hoped to feel something, to feed off the same creative energy that once fed him. I never expected to fall in love.

I will always be drawn to Waterloo County for the family history connection, the forests, and the wonderful people I have met there, but I know the Kitchener/Waterloo area is nothing at all today like it was in Carl’s time. His house in Galt was once a mile or more from the nearest neighbor. While the house itself has been lovingly restored to a much closer version of the original, there is a modern subdivision in the back yard, and an industrial park around the bend. Gone are the big trees the house was named for, and many of the old farm fields now yield only strip malls, restaurants, and big box stores. Were Carl still alive, he’d flee for the unspoiled wilderness up north.

‘Up north’ is where my heart resides. I know exactly the moment I first glimpsed Georgian Bay, because my camcorder clearly recorded my “Oh my God, look at that!” Next comes ten minutes of gushing remarks about the turquoise water, the lopsided windblown trees, and the rocky islands as the camcorder rests in my lap, recording footage of garbage littering the floor of the car.
I’ve been in Ontario four times in the last five years, and it’s the bay that draws me. Thankfully, I have close friends who live in Midland, so it’s a convenient place for me to visit. Being there brings back the memories of the best parts of my childhood in Maine. Quiet walks in the woods, rock-hopping on the coast, spotting the occasional deer, the smell of pine, night skies where the moon and stars feel so near you can touch them.

Unlike Maine, there’s also a deep personal connection for me, almost primal, to the landscape of that part of Ontario. I have many candid family photographs of the Ahrens family on the beach at Leith, near Owen Sound and a newspaper article claiming Carl christened 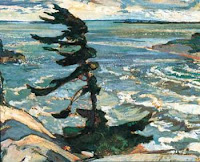 a stretch of forest there his church. Much of the Bruce Peninsula is still strongly influenced by the same Ojibwa tribe that adopted Carl as a young man. I first heard the sound of native drums and smelled the intoxicating combination of sage, sweetgrass and tobacco just outside of Tobermory. Many of Carl’s contemporaries found inspiration in the landscape of Georgian Bay – Tom Thomson, Frederick Varley and A.Y. Jackson to name a few. The image you see here of a painting by Varley is a prime example. Some of the places I find most inspiring, however, have no family connection at all. The first time I saw the north shore at Killarney my immediate thought was “I want to paint this.”

If I could bring a laptop and camp out at my friend Mike’s cabin on Wahnekewening Beach, I’m certain I 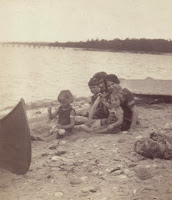 ’d finish my book in six weeks. As a wife and mother of two, this idea is merely a daydream I indulge in when the words just don’t want to come. I remind myself that Carl, too, relied on photographs and memory for inspiration when illness prevented him from leaving his house for over a year, and still produced some of his best work. Hoping to do the same, I surround myself with images of my recent trip to Georgian Bay with my oldest daughter, Sasha. When that doesn’t work I use one of the rocks I picked up from the shore as a worry stone, play my CD of Georgian Bay sounds, drink my Ojibwa Sacred Blend tea and dab sweetgrass lotion on my neck for aromatherapy. All senses engaged, I begin to type.
Posted by Pamela Hammonds at 9:17 AM