As writers, we’re asked this by our critique groups, by agents, by our inner voices. This blog post started out in one direction and morphed into something else. As different twists and turns came up, I followed them, knowing each was worth pursuing. But then as I revised, I worried that there was no cohesive theme. I started writing about professionalism, then career change, then courage, then perseverance. I stepped back one more time and realized it reminded me of something: my life.

In college, I changed my major many times. I started out in art and went through various others, math and psychology among them, before ending up with two degrees—accounting and marketing. Without a clear direction, I explored many subjects and learned something from each one. Though the majors were very different, one thing was consistent: my resolve to get a college degree.

When I worked in the corporate world, I used to stare out my tenth floor window onto the streets of Washington, D.C., and dream of being my own boss. As cyclists delivered packages and weaved through cars and business execs, I imagined their careers (and wardrobes of bike shorts and athletic shoes!) were more exciting than mine. As a CPA, whether employed by an accounting firm, executive recruiter or private company, I yearned for a time when I would answer only to myself. I could play well with others (most of the time!), but I realized I was self-motivated and became frustrated when others didn’t put in 100 percent. Both classic signs of someone who should work for herself. I only needed to muster the nerve to do it.

In 2002, the decision was made for me. My son broke his femur and I took an extended absence from my job to care for him. Several months later, after watching my brave nine-year-old struggle from wheelchair to walker and finally to crutches, I gathered the courage to launch my consulting business. Along with my son, it took me a few months to find my legs, but before long, I had to turn away clients. I was successful because of my expertise, hard work, and dedication. And because I resolved to make it work. 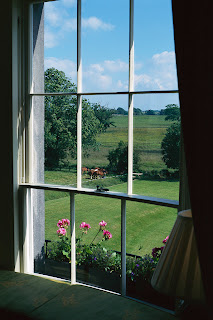 Now I look out my metaphorical window at published authors and dream of my next venture. (I already have the writer’s wardrobe of pajamas and slippers.) I consider the road to publication as a start-up, just like my consulting company, a tiered path requiring a current investment of time with no guarantee of future success. But like any other start-up, the chance of success increases with skill, hard work, and yes, perseverance.

At times my life appears to have no real theme, but it does. Whether it’s a manuscript that needs revision, a new career, or a blog post that needs direction, I persevere until I make it happen.

Elbows-deep in my next manuscript (with ideas for others tucked away nearby), I steal glances out my window, perseverance at the forefront. I’ve successfully started a business before, and I can do it again. I’ve got a theme.
Posted by Joan Mora at 5:00 AM