Nature vs. Nurture vs. Mixture

A few weeks ago m 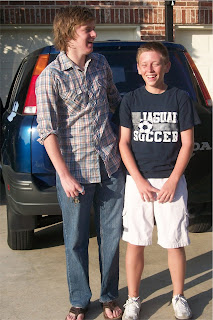 y teenagers humored me by allowing me to take their annual first day of school photo. My two boys, Ben a sophomore and Jacob a senior, hammed it up in the driveway, laughing so hard their eyes were closed and mouths open in most shots.

I’m often struck by how different they are. Given the option, Jacob would take only music and drama classes and hasn’t played organized sports since grade school. Ben constantly keeps a soccer ball between his feet (there’s one under my desk right now), plays on club and school teams, and completes his homework days before it’s due. Even on the outside—from the way they dress to their haircuts—they are polar opposites. They share parents, upbringings and a love of funny movies and Taco Bell, but the similarities trail off from there.

We encouraged them to pursue their passions and only directed them toward a few common interests including Tae Kwon Do (they both have black belts)—nature and nurture collided. While studying the photo, I wondered how much heredity plays into shaping who we become.

I’m pretty creative when it comes to sewing, crafts, baking and other domestic arts. But prop me in front of an easel, and you’d probably swear a first grader has taken over my body. Art lessons might help, but I doubt my work would ever generate any interest outside my family.

I know a woman who plays the piano and took lessons for many years. Even though nearly every note is played correctly, you can hear effort. The music is only tolerable.

As an avid reader, I’ve finished novels that continued to haunt me for days afterward. Others, although not poorly written—every word spelled correctly, every sentence formed completely—didn’t leave an impression on me.

Certainly artistic talent can be nurtured, but are we limited in scope by our genetics? Are true musical, artistic, dramatic and literary talents born? Stephen and Tabitha King's two sons, Joe and Owen, are both published authors. But are they the products of amazing genes or did they learn from their parents' examples? Or both?

I posted this idea of nature vs. nurture on Facebook and several writer friends commented.

Kim: I’m pretty sure I was born this way…
Philip: You can learn technique, but you can’t be taught creativity and imagination.
Robert: I would say born. I can’t see myself any other way. If it were ‘made’ there might not be the same pleasure I get from writing.

Then I asked around some more.

“For myself, I do feel that I was born to be a writer, in the same way another person is born with the innate capacity to sing well, or to do higher math, or to play pro sports,” said Therese Fowler, author of Reunion and Souvenir. “My own interest in and ability to express myself through the written word seems to have been built into me.

“That said, every innate talent needs to be nurtured in order for its owner to succeed. You can be ‘born to write’ and string together the most marvelous sentences or paragraphs 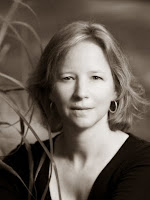 without much effort, but until you've done it repeatedly and studied craft and put your skill to use in service of entire cohesive stories, you may as well not have the talent to begin with.

“I think there are innate levels of ability (same as with singers, dancers, athletes, etc.)—sort of a spectrum of talent, if you will. Some natural writers have the capacity to become great, others just good.

“So, I say nature has more to do with writing ability than nurture does. It's like this: a person may love to sing, love it passionately, do it all the time, take lessons, dream of a singing career—but if that person is tone-deaf or has a grating voice, no amount of practice or instruction is going to turn that person into someone we all want to hear.”

I asked NYT best-selling author Bob Mayer if he always knew he would be a writer and whether he viewed writing as a natural or learned skill. (Bob also teaches writing workshops and has authored a book on the craft: The Novel Writer’s Toolkit.)

“I think you have an innate desire to create,” he said. “But, no, I'm not one of those people who always thought I'd be a writer. I read a lot as a kid, and escaped in my own head with stories. I do think writing can be learned—or else why would I be teaching writing? But 95 percent of students don't really want to learn—they want validation. The few who really want to learn and are willing to, make great strides.
“One of the tenets of my Warrior Writer program is to focus on the author, rather than the writing. Pretty much every writing course is always focused on the product, not the producer of the product, which is kind of backward. I'm focusing on teaching writers how to become authors.”

Like anything in life that brings you joy or satisfaction, if writing is your passion, then by all means pursue it. Write often and treasure what you produce. If your dream is to be published, then devote the time necessary to achieve that goal. Read others’ works, take classes, attend workshops and book signings, learn the business and, along the way, grow a thick skin. Improving requires putting yourself out there for others to judge and accepting the resulting criticism.

Be realistic in your expectations. Only a handful of painters became masters. Many musicians play for only their friends and families. Very few writers become best-selling authors. You don’t have to become famous to be successful. But you do have to write to be a writer.
Posted by Pamela Hammonds at 5:00 AM