I make a pretty good scone; if you don't believe me you can scroll down to my bio where the information is repeated. It's on the Internet so it must be true. Besides, I worked hard on that recipe alongside a friend as we fought the tedium of "the witching hour." Long afternoons with kids too old to nap but too young to desert to the neighborhood. After lunch, before the evening routine set in, a stretch of time when Russian roulette seemed reasonable. Instead we baked (and ate and gained weight).

So the scones, like I said, are pretty darn good. Good enough for a bakery even, better than many I've eaten at a hoity-toity tea house with a cup of Earl Grey and a twenty dollar price tag. So my plan is this: I'm going to send the recipe to a few local pastry chefs, ask them to mix up a batch, tell them to let me know what exactly they think I need to do to improve it (as if!), and then I'll make 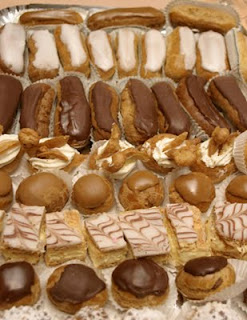 said changes before picking a different one and letting them put it on the menu. They're cooks, right? That's what they do: cook. It's perfectly reasonable to ask this of them, because they're in the food business and have the knowledge and experience to help me figure out how to perfect my baking.

Another thing I plan to do, and soon, is to talk to the counselor at my kids' school. No worries, thanks, all is well in their academic lives. But at home, yikes! The bickering is getting on my nerves, so I figure I'll talk to the counselor about the situation, have her outline a plan for what can be done to cut down the home front squabbles, and I'll finally get some peace. She has a master's in this stuff, so she should know exactly what I should do and, as the school counselor, this is what she does after all.

Before that, though, I need to get my medicine cabinet ready for flu season. I figure I'll call my doctor and have her meet me at the drug store so she can show me precisely what OTC meds I should have on hand in case the flu shot doesn't keep illness at bay. She's a doctor, so she ought to know, right? And as my doctor, one who calls me to remind me it's time for my annual, thus soliciting my business, it seems right to me that her wealth of knowledge is mine to plunder.

As I drive home from the drug store that day, I'll probably pull into the local auto repair shop. There's a pesky light flashing on my dashboard, and I figure I'll pop in and have the guys there decipher its meaning. I'll even give them some paper to jot down the steps required to fix the problem so my neighbor kid can do the repair. Finally, the dang light will go out and I can remove post-it blocking its unsightly glow. Those repair guys have the information, and since I've gotten mailers from them proving they want me to visit, they must owe it to me. Just like the doctor and the counselor and the baker.

Except that's ridiculous. The baker owes me the cake I order, not the knowledge behind his years at school and thousands of measured cups of flour. The counselor works hard every day, but what happens at my house, unrelated to the schoolhouse, isn't her problem or concern. And when I make an appointment with my doctor, I can ask whatever I want but the co-pay does not extend to house calls. Not in 2009, anyway, and certainly not to my local CVS. The auto repair guys? They learned to fix cars so they could make a living, not so they could save a cheapskate like me a thousand bucks having a teenager change my timing belt.

Yet I read complaints from writers, over and over, that agents should explain their query rejections. (Jessica Faust at Bookends posted about this on Monday, and Nathan Bransford with Curtis Brown and Janet Reid of FinePrint and WordServe's Rachelle Gardner and plenty of other generous and helpful agents have blogged about the topic in various ways.) The writer spent hours crafting the letter; the least the agent can do is to explain why it's a no. And furthermore, some writers seem to think, a line of fur rising huffily along their spine, the query isn't enough to really judge, and the agent should just read the book and if they still don't want to rep it, tell the writer why. Explain what's wrong. Give the writer the benefit of the agent's experience. Agents know books, they know manuscripts, and the writer knows, he knows the agent has the knowledge and skills to figure out what's keeping the work from publication so they should spend the time--it's only a few minutes!--and tell the writer. Agents are in the business, they are soliciting clients, so how dare they be so duplicitous to ask for a query and then not bother to explain their rejection. They owe us.

Flip it around and now we are the successful published authors. We are out there shilling books, selling our writing--soliciting readers--so we owe it to the audience to be writers. If some lady needs a Dear John and isn't so good with a pen, well, surely this writer owes it to the reader/insistent customer/unfaithful girlfriend to write it for them. Because hello, writer, that's what you do. You have the skill, so it's incumbent on you to share it with...whomever asks.

The fact that someone has a base of knowledge you value means squat as far as what they must do for you. If an agent is gracious enough to offer a comment or suggestion or even a reason for a rejection, it's a gift. A form rejection is a gift. You are not their client. You applied, you were turned down, that's it. Just as the HR guy at Microsoft doesn't owe you an explanation when your resume doesn't garner an interview (and just as Bill Gates certainly doesn't owe you a personal Windows primer session), an agent doesn't owe you anything more than "not for me" and a click on send.

And honestly, maybe not even that. Agents are deluged with queries, and even if it's nice to get a response, the "no response means no" is still a response, no matter how many times you cross your fingers and check your email each day.

This is a business, a query is an application, and it got a no. Plenty more opportunities out there. Let's all grow up and concentrate on those, shall we?

That's my plan. Right after I finish my scone.
Posted by Elizabeth Lynd at 5:03 AM