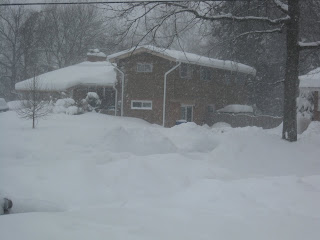 news of the east coast blizzards. Born and raised in Maryland, I lived through plenty of storms over the years. I might have mentioned I was born during a terrible snow and an ambulance drove my parents to the hospital because my dad couldn’t get his car out. I've built my share of snowmen and ladies, families of white with pipes and carrots and scarves. I have lots of family and friends there now trying to dig their way out.

One of my sisters emailed a picture of the view from her front yard and across the street to her neighbor’s house. It's level, as though no street threads between the two houses.

Another sister sent a picture of snow level with her front porch, which sits at least three feet from the ground. 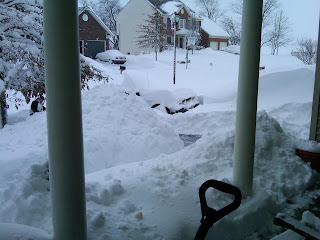 A former neighbor’s lawn is decorated with a snow drift sporting a message of 2010’s Olympic rings and my Facebook friends have posted snowy sights eerily similar to those I once lived through.

Right now in Plano I’m looking at piles of white. Layers so thick, the surface below might never be seen again. But it’s not the Texas snow of 2010 I’m looking at. It’s my desk.

In the best of times, I’m not one to keep a clean and tidy desk. Organized for me looks like stacks of plastic folders, each containing a project, whether notes for a short story contest or my latest WIP, and piles of books to be read. Now I’ve added consulting projects, tax return information, college brochures for my junior, and binders outlining my role as one of next season’s football moms. The piles have become messier as the weeks roll past.

Usually it only takes a few Sundays to become so agitated by the sight of it, that I clean it off, get a brisk spurt of energy and rejuvenate whatever writing project I’m committed to. But now I’m having that antsy feeling. That no matter how clean my desk is, I won’t find the right words, the right energy to focus my writing. Maybe it’s the burgeoning pile of rejections I’ve accumulated, maybe it’s the bitter wind outside my window, maybe it’s the germination of files populating my desk.

I remember that feeling in the dead of a Maryland January. When no amount of winter sunshine or memories of cherry blossoms would hurry April along. When the heat and humidity of July and August seemed as remote as Japan. But I do remember what it feels like to be awash in ideas, in the need to get them on paper, to mold them into characters and plot, to march them out like a snow family in the neighborhood. Maybe it was that initial triumph in the snow that gives me courage to dig my way out of storms.

Right now I feel buried in unfinished projects. But I’ll dig my way out. Just like my family in Maryland will dig themselves out of several feet of snow.
Posted by Joan Mora at 6:00 AM