I Love a Good Fight 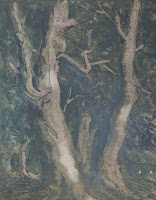 Last week I sent a new chapter of The Oak Lovers to Joan for her critique. In my e-mail I confessed to getting a perverse sort of pleasure from pitting Carl and Madonna, my two main characters (and great-grandparents), against each other. I agonize over tender scenes, but the moment tempers flare, accusations fly and doors slam, my fingers fly over the keyboard. I hear them most clearly when they’re shouting at each other, perhaps because they so often did. They remain with me when Real Life interferes, two volatile souls bickering in my head as I grocery shop or run the kids to school.

Joan replied: “You might have to infuse a few more shouting matches earlier [in the book] then. I remember one or two, but if they fought all the time…”

Those are dangerous words for a compulsive editor. Later, I thought. Move forward, edit later.

Over the next few days, was hit with the largest snowfall on record and my progress ground to a halt with children unexpectedly home and a 12-hour power outage. During a quiet moment I pulled up an early chapter, intending only to read it and see if I could easily tweak a disagreement into a full fledged argument.

I happened upon a scene I originally wrote as narrative nonfiction and have reworked at least four times since. In it, Carl Ahrens, then married to another, confronts seventeen-year-old Madonna about a rumor he has heard about her accompanying a young man into a notorious alcove during a dance at Roycroft. She quickly deflates his rage by explaining it was all an innocent mistake…

I grinned. What if it wasn’t a mistake? What could have prompted her to do such a thing? How much would she tell Carl, given that she is unaware of his feelings for her? What would tempt him to make them known more than his muse sending him into a full-blown jealous rage?

I mulled it over. Making such a change would involve far more than a tweak here and there. It was a vital scene quickly leading to two pivotal scenes. Each escalates in sexual tension that must be kept in check given their age difference, his marital status and, well, the facts as I know them.

As an experiment, I rewrote the scene in a separate document. 734 words – 300 more than the original. Damn. The last thing I need is more words. I re-read both versions and there’s no question I’ll go with the one where Madonna, like any teenager, first minimizes and then conveniently omits parts of her story. It will most certainly come back to haunt her, setting the stage for a glorious fight. Damn again.

As I scan t

hrough the next scene, I’m horrified at all that must go in order to make it work. Some of it I dearly loved, and I doubted I could figure out how to salvage my favorite lines. Unwilling to commit just yet, I opened another new document, writing without any thought of the future consequences to the text. 928 words later I hit save, exhilarated that there had been times Madonna baited Carl so strongly even I didn’t know what he might do. Even better was that I accomplished this in 450 fewer words than the original scene, with more to be chopped in the next.

I’ve yet to decide how to keep them balanced on this knife’s edge until fate intervenes, but one of the greatest pleasures of being an author is that in the end, it’s up to me.

Note: Artwork shown are details from paintings and sketches by Carl Ahrens (1862-1936)