The Hero's Journey in Music 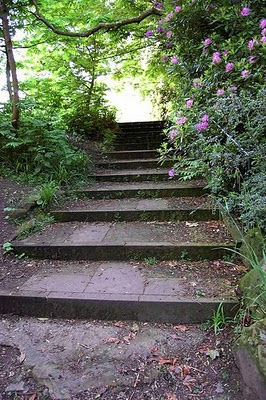 Years ago, Joseph Campbell’s Hero’s Journey, a method used by many writers to construct a novel, was described in his Hero with a Thousand Faces. You’ve probably seen countless posts using the Hero’s Journey to dissect novels or films.

I struggled to follow the steps mentally, even with it laid out before me in a post like that. Then, several years ago, I got a new CD by one of my favorite singer/songwriters, Damien Rice, entitled simply 9.

Like me, you might have heard the first track, 9 Crimes, on an episode of Grey’s Anatomy and gone racing to your computer to discover the composer of these haunting lyrics, melody, and chorus. You might have rushed out to purchase the album, only to be puzzled by the very odd mixture of tunes he performs with Lisa Hannigan.

But one day, while taking a leisurely bath, as I often do either trying to relax or puzzle out one of life’s mysteries, I was listening to the album and it hit me.

It was a novel.

I was absolutely awed when this dawned on me, and I can’t tell you how many times I’ve listened to this musical novel since, picking apart its structure—the characters, the settings, the arcs. I can read this story about a person’s journey through infidelity again and again.
Recently, I was again stunned when I studied the structure of the Hero’s Journey and realized how well the tracks of 9 followed it.

Damien Rice might laugh if he ever reads this post. It may not have been his intention at all, though I suspect he is smarter than that, having seen him in concert and watched the production that made it the whole experience it was from start to finish.

Whether it was his intention or not, I thought it might be interesting to show how I’ve managed to apply the Hero’s Journey to the 11 tracks of this album plus the one track that never made it onto the album, but appeared with the EP release alongside the song 9 Crimes.

The Hero’s Journey in the context of storytelling is explained here in the simplest terms by Christopher Vogler. This was my main source for discerning the steps and paraphrasing them in my own words. I also applied the steps of the three-act structure of Campbell’s monomyth or Hero’s Journey.

(Note to reader: If you haven’t already fallen asleep yet, you may be as analytical as I am!)

So take a look at what I found. You can find video of any of these songs on Youtube if you’d like to listen to them, and of course, the album is widely available for purchase. The lyrics are quite explicit in several places, so don’t blame me when you forget to turn down the stereo in your car while transporting children—you’ve been warned. My teenagers know the album so well, they go ahead and bleep it for me when we’re in the car.

Because song lyrics are copyrighted and I don’t have permission, I don’t quote them here, but rather give a quick interpretation of them as I see them. You can find the lyrics to all of them except Rat Within the Grain on Rice’s website here.

Step 1: Ordinary World
Gives the reader/listener a window on the world of the hero as it was before the catalyst happened that set him on the journey, though there’s something new in the world that is causing the hero discomfort or stress.

Song: Rat within the Grain (not on album, just on EP)

Rice talks about how “this” wouldn’t have happened if he hadn’t missed a plane. It’s a huge misunderstanding, and he suspects he may even have been set up. He claims his only desire was to be wonderful and wanted by his significant other. It’s almost like a prologue to the rest of the story.

Steps 2 and 3: Call to Adventure and Refusal of the Call
The hero struggles with the new opportunity before him/her and whether or not to accept it, then begins to alternately face the change and turn away from it.

This duet between Rice and Hannigan gives the impression that he is struggling with whether to be unfaithful to his significant other or not—with this unexpected and expected adventure that has been placed before him. He knows it’s not the right time or place—in fact, that it’s not right at all—but feels so messed up in his life and relationship that he’s tempted, possibly beyond what he can handle. He continues to blame others for the test in front of him, but the listener can tell he really blames himself, too.

Step 4: Meeting with the Mentor
The hero turns to a seasoned mentor or reaches within for courage and wisdom.

Song: The Animals Were Gone

In this poignant, yet almost hopeful song, Rice sings of waking up to an empty house for the first time, personified by the absence of the family pets. He sings as though to his lover who has shunned him, telling her that she is still all that he sees.

Step 5: Crossing the Threshold
The hero realizes the old world is behind him and commits to enter the new one, however unfamiliar its rules and values.

Rice sings a mournful admission that it’s over—that if he is to go on, he has to accept it and move forward, no matter the pain it will cause him. He compares the old to the new to the old again.

Step 6: Tests, Allies, and Enemies
Through a series of tests, the hero figures out who he can trust in his new world.

Our hero is angry. In fact, he is furious, and this pounding song says so clearly. (Note: Lots of bleeping necessary for sensitive ears!) He feels like his lovers, old and new, are playing games—leading him on or stringing him along selfishly. He asks to be released from the hell they’ve created for him.

Step 7: Approach
The hero (and his new allies) gets ready to face big challenges in his new life.

It’s time to stop sitting around and worrying about what other people think in this upbeat song. Our hero realizes he could hang around doing nothing and feeling guilty, but he wants to take action. Time is short and his bucket list is too long.

Step 8: The Ordeal
The hero confronts his worst fears and maybe even death, and comes out on the other side.

Our hero completely expects he’s going to do something again that he’s been condemned for in the past. He is saying, once again, “Take me as I am or don’t take me.” He doesn’t have any reason to expect more of himself than he’s been able to deliver in the past and doesn’t want the new lover in his life to expect more either. In acknowledging this, he feels free.

Step 9: The Reward
The hero claims the prize he’s won by facing death, celebrating, but also fears losing it again.

Rice speaks about this song on a live CD. He talks about dealing with frequent depression and how it makes his songwriting better, but also how he didn’t like being in that place, how it was a relief to come out of it, and how it (depression) isn’t a fair exchange for the reward (songs that sell). In our hero’s journey, it seems he’s claiming his new life, his newfound happiness, but still fears going back into the abyss he’d sunk into before.

Steps 10 and 11: The Road Back and The Resurrection
The hero is ready to complete his adventure. He wants to be sure the treasure is longlasting and brought home. Sometimes, this is a dangerous or place to be in. He faces the most severe test yet, but is purified by his final choices. The original conflicts are resolved.

As with many of the songs on 9, it’s unclear whether the song is sung to our hero's original lover or the new one, asking whether each is happier in their new or old space, whether they want to take the decisions they’ve made to the next level or reconsider before it’s too late.

Step 12: The Elixir
The hero continues the journey or goes back home, but with new knowledge of his transformation and how others can be transformed.

This is a song about forgiveness and resolution. It’s not stated whether Damien Rice’s hero returns “home” (to his original love) or stays with his new one, but clearly, he can now accept that he no longer must hate or be angry. He can forgive, and remember the good in the past, and accept that life, in all its glorious mess, can be a restful place after all.

So readers, what do you think? Crazy? Not crazy? Do you have a favorite album that follows the Hero’s Journey the way you see it? Would love to hear your thoughts!

Email ThisBlogThis!Share to TwitterShare to FacebookShare to Pinterest
Labels: The Hero's Journey; Hero with a Thousand Faces; Damien Rice; 9 Crimes;