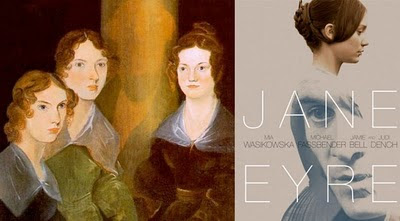 
Recently, I was asked if our group would be interested in attending the screening of the new Focus Features Jane Eyre film. Without exception, we jumped on it! I mentioned that we probably had blog friends who might be interested, too, so was excited to find several extra passes in the package.
We are excited to be able to give away several free passes to a screening of the movie in Dallas, compliments of Focus Features.
We'll send out at least five passes for two to the screening, to be selected at random from the qualifying entries after 5 p.m. Central Standard Time, Wednesday, March 9.
The screening will be Thursday, March 17, at the Studio Movie Grill Dallas (Royal @ 75, 11170 N. Central Expwy).
We decided to have a little fun with this. First, I asked the What Women Write ladies the age-old question:
Bronte or Austen fan?
Then I took it a step further:
To what Bronte or Austen character can you most relate?
I received some fun responses! Hint: Some of us are fans of neither ...
Here's how we responded!
Joan said:
I’m a fan of both Emily and Charlotte (haven’t read Anne, but I need to remedy that) and Jane. Really depends on my mood. Brontés for melodrama and heartache and Jane Austen for a little bit of everything: humor, family drama, manners, issues of circumstance, and lots of love—unrequited, forbidden, feigned, mistaken, and of course, true. I’d have to choose Elizabeth Bennet, because I’m a bit too candid sometimes. I only wish I had her quick wit. Looking forward to our big night at the movies!
Elizabeth said:
I’m an Austen fan, definitely. Not only is she my favorite writer, I don’t really love Bronte at all. As for character—maybe Anne Elliott? Certainly she pulls at my heartstrings, but she also met someone and lost him, and then years later, found him again. We won’t be the subject of an enduring love story, but my husband and I did something similar (although his being poor had nothing to do with us not connecting the first go-round).
Pamela said:
You can color me uncultured, if you'd like, but I'm not a fan of either, although I do like movies based on Austen's works. Could be the incredible casting--Hugh (sigh), Colin (another sigh)--but I've tried to read her books (and own several) and just can't get pulled into the writing. I've never read a Bronte sisters' book. As far as a character goes, I'd have to say I identify most with Emma. I loved her pluck, AND I'm pretty handy with a bow and arrow. (Which might only be in the movie since, alas, I've never read the book.)
Susan:
I'm neither ... sad to say, even with living in England, touring Haworth, the Bronte's hometown, and attempting to read Austen multiple times, I'm just not a huge fan. (I feel guilty for saying that. However, still looking forward to a night out at the movies with you guys!)
Kim:
I did my master’s thesis on Jane Eyre as allegory, arguing that one of Charlotte Bronte’s favorite books was Pilgrim’s Progress and that Jane Eyre follows the same format. The whole St. John part of the novel always bugged me, but it makes perfect sense if it is Jane’s Slough of Despond. I love both Bronte and Austen, but I’m more drawn to the raw passion of the Bronte characters, perhaps because I was introduced to them first. I don’t know that I actually identify with either Jane or Cathy, though I confess my first love was Mr. Rochester, whom I met at the ripe old age of twelve. I’m still smitten, and have seen every film version ever made, always hoping to see the man I imagined in that role. The worst, in my humble opinion, was William Hurt (a blond American!) in 1996. The best was Toby Stephens, though I’m sure many purists hated the 2006 Masterpiece Theatre version for the highly sensual farewell scene. For me, that scene was right up there with Colin Firth (as Mr. Darcy) diving into the pond at Pemberley.
We'll have to see if Focus Features' Mr. Rochester lives up to Kim's ideal!
And me:
I am more a Bronte fan than an Austen fan. I got stalled halfway through both Emma and Mansfield Park. I loved Jane Eyre after first listening to several chapters on audio to ground myself in the voices. But like Pamela, I also enjoy the movies made of Austen's books! I think I'm partly prejudiced for the Brontes after a visit to England a few years ago where I fell in love with the little town of Haworth -- especially after being stranded there for several hours while waiting for my husband to get un-lost, sitting in a pub with the locals. I'll never forget Jack, the older man who claimed he'd lived there for 20 years but wasn't considered a local just yet. He got on the phone with my husband and brought him step-by-step to Haworth and the pub, with the final bit being pulling me along to the upstairs window, leaning out, and waving Todd down. As for a character, I can relate to Elinor Dashwood from Sense and Sensibility. For years, I hid my own strong emotions under a veil of sensibility and reserve while I did the things I felt necessary and that I was expected to do. But I got over it. :)
Now you!
Please join in the fun and answer the same questions. Feel free to comment whether you are anywhere near Dallas and can attend the screening or not. Simply add this note to your comment if you DO wish to be entered in the drawing:

Please enter me in the drawing!

(How hard was that?)
So. What about you? Bronte or Austen fan? And which character do you relate to the most?
Winners will be announced here on the blog after 5 p.m. Wednesday, March 9.
Congrats to Pam and Anonymous. Due to low response, we have extras! If you're in the DFW area and would like to go, please email me at julie(at sign)juliekibler.com by Friday and I'll get them in the mail, first come, first served while they last.