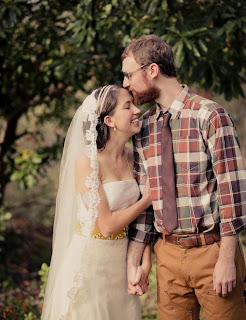 By Julie
It’s been a crazy couple of months. After I signed with the world’s best literary agent in late July (Elisabeth Weed, who works with the world’s best foreign rights agent, Jenny Meyer), and we sold Calling Me Home to St. Martin’s Press domestically and nine foreign markets in September and one in October, my son had the nerve to think it was the right time to get married.

(That's my handsome son and his beautiful bride over there to the right, in case you didn't guess ...)

Okay, the wedding had been planned for months. That wasn’t his fault.

Regardless, we had family in from California and Washington state for a total of ten days leading up to and continuing after the wedding, and we had a blast. For the duration, I didn’t think about the book much at all, as it should be. Family comes first!

Then there was Thanksgiving, which meant a visit from the newlyweds, a bountiful turkey dinner at the in-laws, and a week’s vacation for my husband and kids, including several movies, museum visits, and lots of eating out.

Then, of course, we’re just off our annual What Women Write retreat, and as always, we’re all energized and ready to take on the fictionalized world. Joan did a great job talking about what we each accomplished on Monday, but I'll say a little more about that in a minute.

Now here it is the second week of December! When I sold Calling Me Home in September, publication (early 2013) seemed a million moons away, but wow, I can see how people aren’t kidding when they say the time flies.

I thought you might be interested in hearing about the various and assorted things I’ve already encountered on my journey from sale to publication.

(If not, please note our new feature at the bottom of the blog with “You might also like” links to other posts. Ha.)

In September, I mostly took deep breaths and pinched myself a few thousand times and looked behind me to be sure “they” weren’t talking to someone else and counted my lucky stars.

Shortly after the domestic sale, I had the privilege of speaking with a film agent who is excited about the possibilities for getting Calling Me Home to the big screen, and he is working behind the scenes to help make that happen in the right timing and fashion.

In October, I received most of my foreign publisher’s agreements from around the world via Jenny and Elisabeth. A few weeks ago, I sent them back (all something like 250 sheets of paper—many of them signed, most of them initialed!).

I also learned in October--on my birthday, in fact!--that Calling Me Home was selected to be part of the France Loisirs Avant-Premiere program. France Loisirs is France’s one remaining book club, something like Doubleday or Book-of-the-Month-Club here in the U.S., where customers order books and/or receive certain ones on auto shipments. The “Avant-Premiere” designation means Calling Me Home will be a featured selection, and this happens before it’s available in any other format in France. I’m not sure what all the details are yet, but this sounds like an exciting and prestigious honor for a debut novel! My French publisher was very enthusiastic about it, and, of course, Elisabeth, Jenny, and I were delighted to get the news.

In late October, a foreign language translation deal for the Catalan language came in. I literally had to stop what I was doing and look up Catalan, wondering where or WHAT it was. It turns out Catalan is a language spoken in certain areas of Spain (an area called Catalonia), France, and other small pockets here and there. The publisher is located in Barcelona. And here I was thinking we already had Spain covered. You learn something new every day!

Near the end of November, I received my first editorial notes from Hilary Teeman, my editor at St. Martin’s Press, and a few days later, a fat envelope from Elisabeth containing my St. Martin’s contract, which has been studied and signed and sent off to be finalized.

I made a good start on my revisions during our annual www retreat, the absolutely best part of that being an impromptu brainstorming session where my critique partners allowed me to talk through a requested edit I was having trouble wrapping my brain around. With their help, in less than an hour, I was able to clearly see what I needed to do on something I’d been pondering with little breakthrough for days. Never underestimate the power of a good critique partner or group.

This week, I heard from a couple of other author friends that Calling Me Home appeared in industry news in the Historical Novels Review, a publication of the Historical Novel Society. I don’t subscribe to the publication, but one of my friends graciously offered to mail me her copy! (Which reminds me … Erika Robuck needs my address …) I was surprised to learn this as I have never classified my novel as historical fiction because one of my story lines is present day, but I’m certainly not going to argue! I have said “straddling the line between historical and mainstream fiction,” so there you go.

And today, I learned my German publisher wants an author photo in January and will soon be ready for other promo materials from me! And now I’m wondering how I’m going to lose that last 20 pounds by January … uh oh.

As you can see, things are moving right along. I can’t believe how time really is flying. I’ll try to pop in every now and then in upcoming months with a rundown like this, not too often so as not to be boring, letting you know what’s happening.

Anyone else in our What Women Write audience have any exciting news to share? We’d love for you to leave us a comment! (By the way, we are having a LOT of trouble with our comment form. We have discovered if you use Firefox, it works better. In Internet Explorer, it sometimes takes about three tries, so be sure and copy your comment before submitting in case it doesn’t take the first time. Sorry for the trouble—we are frustrated, too!)

Hope everyone’s gearing up for a happy holiday season!