Your Wild and Precious Life 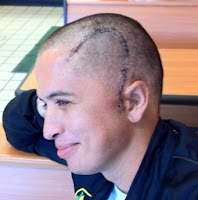 As some of you may know, a dear friend of mine was diagnosed with brain cancer about a year ago. I blogged about him here. This spring, after the surgery to remove his astrocytoma, I went to Austin, Texas. I stayed with him for a few days while he--unable to drive, work, or run--walked and talked his way into recovery.

We walked together--this marathoner and me--for miles and miles each day. And he talked. About his cancer, about his brain. About his daughter and wife. About the differences between how his brain worked now as opposed to before. Pre-brain-cancer and post-brain-cancer, for some people, is never the same place. My friend was unbelievably blessed with a skilled surgeon and the prayers of many to come out of the operating room as the same man he'd been going in. As we walked, he found that words appeared differently, or sometimes, didn't show up at all--when he summoned them. He realized that one side of his body wasn't as strong as it had been before.

But otherwise? He was miraculously and beautifully well.


When I prepared to leave his home, I noticed that the refrigerator was covered in word magnets. I left my mark by piecing together, word by word, a simple Mary Oliver quote from her poem The Summer Day: 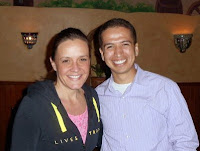 "Tell me, what is it you plan to do / with your one wild and precious life?"

I thought I was leaving the message for him, yet perhaps I left it for me. He'd been adamant that he'd lived his life the way he wanted, and had no regrets--either before or after the brain cancer. Could I say the same?

Since his surgery, the Mary Oliver line has reappeared in my own brain often. I became a stay-at-home mom, completed my manuscript, The Angels' Share, and got my health back in order--including the addition of running to my routine. I didn't want to wait on a scary diagnosis before getting my diet and body in shape. I didn't want something like cancer to shake me up enough to finally force me to finish my manuscript. And I didn't need a crisis to tell me that I needed to be home with my children, probably more than anything else in the world. When I thought about what I needed to do with my one wild and precious life? That was easy. I needed to live it deliberately.

Overall, my friend made a miraculous recovery. Last weekend, he shattered his personal record for the half marathon at one hour and twenty-three minutes (That's a 6:19 mile pace.) He already qualified for the Boston Marathon and will run on Team Livestrong this spring with other cancer survivors. 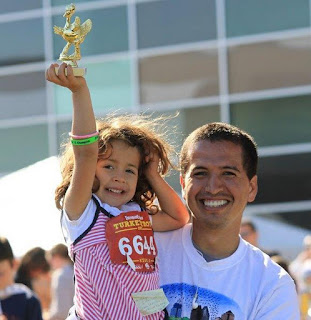 At the same time, his story reminds me that life is strange with its twists and turns, and is sometimes less believable than fiction. His wife of almost a decade left him soon after his cancer surgery. She filed for divorce and gave him primary custody of their four-year-old daughter. Which goes to show you that life--even when it is its most miraculous and spectacular--can still kick you in the pants. Even when you think you've beaten cancer.

Hopefully, we don't need our lives flip-flopped in order for us to make better choices. Hopefully we can find our dreams, love our families, and finish the damn book--right, writers? without cancer and a divorce to scare us to death.

Tell me, what is it that you plan to do / with your one wild and precious life?

I went into 2011 with big plans. Somehow, I accomplished most of them, but it wasn't on accident. What does 2012 hold for me, for you, and for my friend? We don't know. We can only live as deliberately as possible.

And keep running.
Posted by Susan Ishmael-Poulos at 1:00 PM