A Review of The Lost Wife by Alyson Richman

In pre-war Prague, the dreams of two young lovers are shattered when they are separated by the Nazi invasion. Then, decades later, thousands of miles away in New York, there's an inescapable glance of recognition between two strangers. Providence is giving Lenka and Josef one more chance. From the glamorous ease of life in Prague before the Occupation, to the horrors of Nazi Europe, The Lost Wife explores the power of first love, the resilience of the human spirit--and the strength of memory.

Alyson Richman is the author of The Mask Carver's Son, Swedish Tango, The Last Van Gogh, and The Lost Wife. She loves to travel, cook, ride her yellow bicycle, and do ballet. She currently lives in New York with her husband and two children.

I want to start by telling you a story. I know this may seem an odd way to open a book review, but there’s reason for it.

My seventh grade language arts teacher was horrified to learn that our school district’s history curriculum would barely touch on the Holocaust. She felt the only way to prevent such atrocities from happening again was to educate the younger generations. We read Elie Wiesel’s Night in class and learned to spell gestapo and crematorium. We watched unflinching documentaries and movies about concentration camps. My amazing teacher also found several Holocaust survivors and spent at least a month’s worth of weekends shuttling groups of her students all over Maine so we could interview them. The woman I met was an Auschwitz survivor named Marta, a towering workhorse of a woman with a kind, homely face. What struck me most was that even as she described beatings, rapes, starvation, and constant fear of execution, she prefaced everything by saying how lucky she was. She was lucky to be ugly. Pretty girls were sent to the front to “service” the S.S. soldiers and were shot if impregnated. (Her sister met this fate.) She was lucky to be big because she was strong and could do heavy labor. (Her frail mother was gassed). The lack of emotion as she spoke left a lasting impression on me. 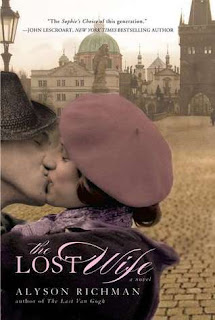 Since then I’ve seen every WWII movie and read every book on the Holocaust that I can find. I learned about The Lost Wife from my friend, historical novelist Stephanie Cowell, who has never led me wrong in her book recommendations. At the end of the prologue my jaw dropped and I knew there was no way I could put the book down until I learned what had happened to Lenka and Josef. By thirty pages in, I knew it would be on my 2012 Best Reads list. I devoured this novel during every stolen moment alone, which took some creativity with two energetic kids home for Christmas break. The love story made me ache. The atrocities of Terezin and Auschwitz were described in an understated and horrifically beautiful way. I could hear Marta’s voice behind Lenka’s, and it was like I discovered hell right along with them.

Have you read The Lost Wife? I’d love to hear your thoughts! You can leave comments here or (since some people have difficulty leaving comments on Blogger) on What Women Write’s Facebook page.
Posted by Kim Bullock at 8:16 AM