By now you’ve made your choice—The Super Bowl or Downton Abbey. By now I'm feeling the effects of staying up too late to watch both. Football is fun, but Downton Abbey is an addiction. For you too?

Finding out you share the same literary tastes as others is a real treat. Like discovering a new novel or vacation spot.

Many of my writer friends share my passion for British literature and period dramas, but sometimes you find those who do in unexpected places. I expect similar tastes in writing partners (Sense and Sensibility anyone?), even from the one of my three sisters who first steered me toward that tiny but powerful island of literature. She’s the reason I read Josephine Tey’s Brat Farrar and Elizabeth Jane Howard’s The Cazalet Chronicles and Dodie Smith's I Capture the Castle, and found two of my favorite authors, Rosamund Pilcher and Maeve Binchy.

We both agreed we could watch Love, Actually every night of the year and that any movie with Colin Firth, Alan Rickman, Matthew MacFadyen or anyone with the last name Redgrave is okay by us. Many times we’ll spend more time talking about literature than our mom or the state of the world.

If you have yet to imbibe in that addicting show Downton Abbey, go to pbs.org or Netflix and pour your first of many glasses. Julian Fellowes created a brilliant drama and explains our fascination with British society here.
Here’s a tease of last night’s episode.

A few years ago I learned one of my cousins was also an Anglophile, and she and I often email back and forth about Downton and discuss plot twists. She insightfully said, “I think part of the success of Downton is that no one is perpetually aggravating, even O'Brien has a conscience. And Bates' wife has been silenced. I'll be glad when that arc is finally finished and Bates and Anna are together. These characters grow and change in ways that are very uncommon. Look how far Mary's come, and Maggie Smith is threatening people so that she can take care of the hired help, that is really brilliant.” And, “I hope O'Brien kills off Bates' wife, that's the only resolution I'll settle for.” Ooh, I responded, that would be a delicious twist! 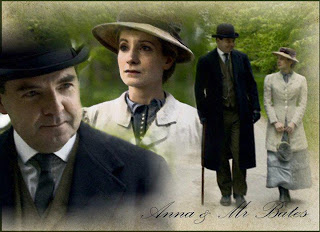 My husband’s aunt likes British drama as well and at Christmastime we oohed and ahhed and huddled together on the couch sharing titles. Even at work, where we primarily discuss real estate investment and financing, I found an unlikely companion in someone I barely knew. She sent me the link to Secrets of the Manor House and I gave her a list of books to take on vacation and she’s making her way through them happily.

Sometimes you never know: the person sitting next to you on the subway or in line at the DMV, might share your passion for Downton Abbey or Love, Actually. Or she might prefer quirky movies like Hot Fuzz, oddball shows like Spaced or Love Monkey, or a basketball or football game. Or she might just like them all. You never know unless you ask.
Posted by Joan Mora at 6:00 AM