My Night at the Emmy Awards

Last weekend, I didn’t write one word of fiction. But I hope you’ll agree I had a good excuse: I walked the red carpet at the Emmy Awards and joined the stars to watch the show in person.

It was my first experience with false eyelashes and let’s just say that a certain actress wasn’t the only one with a wardrobe malfunction (not linking, but you can find it!). Thankfully, the only bare parts I showed were my feet.

I also ate dinner in bed at the Supper Club with twenty-five new friends, sat on the retired Friends’ Central Perk couch at Warner Brothers, visited the set of the Big Bang Theory, dined overlooking the Pacific and had sushi at almost every meal.

But let’s backup a bit. A few weeks ago I got a text from my younger sister, Madelyn. “Read your email NOW!”
I clicked on my phone and saw the following subject line: “Are you sitting down?”

I assumed it must be good news, but what? With Madelyn, you never know. Last winter, I turned down her offer to attend the Palm Springs Film Festival and, after seeing pictures of her not five feet from George Clooney and Brad Pitt, I vowed not to turn down her fabulous offers again.

The email invited her and a guest to attend an Emmy Experience weekend, capping it off with a night at the 64th Primetime Emmy Awards. (She has the coolest job! I get invited to lunches where speakers wax on about taxes or real estate investment). I jumped up from my desk at work and called her immediately. As I paced, my heart skipped as though I had been nominated for an award and I mentally calculated how to justify taking off work another two days, after a week off in August to deliver my sophomore back to school in California. But anyone who knows me is well aware I rarely turn down the opportunity to travel. Especially to the west coast.

And so I prepared for my evening of glamour, knowing there wasn’t enough time or cash for cosmetic and Lasik surgery, or for an 8-week intensive personal trainer at the gym. I kept reminding myself, no one is looking at me. But my vain side wouldn't relent and I searched out the lovely Emily at Nordstrom to help me try on dresses. My husband was a good sport when I asked him to pause the football game and drive to the store to choose between two.

After a morning trip to get coifed by Ashley at The Dry Bar in Legacy, the long weekend started with a two-hour drive from LAX to the hotel. Luckily, I shared the ride with my new friends, Linda and John Boozer, event planners extraordinaire. (Need a book launch planned?) Our driver Stephen, a comedian with a day job who never tried to make us laugh, delivered us safely to the Hilton, just in time for our first round of sushi.

Those gracious hosts at the L.A. Convention and Visitors Bureau --Bryan, Cory (pictured here), Angie, Anna, Mariles, Mary & Teresa-- sure know how to show their guests a good time. They amused us with stories and trivia, provided forgotten necessities, even offered press-on toenails (thanks Cory!).

We viewed L.A. from the heights of the Griffith Observatory, where we saw a sorbet-colored sky scrumptious enough to eat, dined at the lovely Terranea Resort on the Palos Verdes coast and at Katsuya, serving some of the best sushi I’ve ever eaten. We were treated like royalty and driven around by Strack Premier Transportation, owned by the charming Matt Strack.

Los Angeles has a bad rap. Big city, lots of traffic and big egos. Yeah, there’s that. But I’ve been there many times, and on this trip I was introduced to new treats and unexpected adventures. The city has something for everyone--beaches, mountains, shopping, star-gazing, culture, you name it. Not to mention, I fitted in a few hours to see my son.

I’ve watched the Emmys on a television as small as 18 inches (when Lucille Ball, Dick Van Dyke and Mary Tyler Moore accepted awards) and as large as our big screen in the media room, but being at the Emmys was an experience I’ll not soon forget.

One of the straps on my fancy shoes ripped from the sole and I walked the red carpet barefooted. Once inside, my ever-efficient sister took the shoe to guest services where they promptly duck-taped it back in place. Classy, right? At this point, my fake eyelashes were screaming to be pulled off, but I resisted, preferring irritation to a white glue line across my lids.

So my night of glamour got a bit less glamorous, but I was in the same building as some of my favorites: Jessica Lange, Julianne Moore, Tom Hanks, Brendan Coyle of Downton Abbey fame (yowsa!) and many others. But I was also there with my new friends who made me feel like a star.

All because I decided to forego writing fiction for a weekend and get out in the real world of Los Angeles. 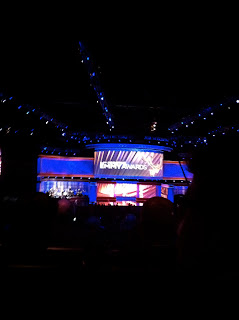