Rachel Joyce on What Women Write 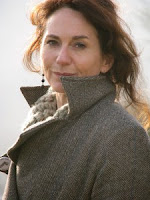 I am thrilled to introduce our readers to Rachel Joyce, lovely author of The Unlikely Pilgrimage of Harold Fry. This novel was sheer perfection. I wisely bought the audio version from Audible.com and listened as Jim Broadbent became Harold Fry.

The following is an excerpt from the book. If you’d like a preview of Broadbent’s delivery, listen to the magical book trailer.


Small clouds sent shadows scurrying across the land. The light was smoky over the distant hills. Not with the dusk, but with the map of space that lay ahead. He pictured Queenie dozing at one end of England and himself in a phone box at the other.

The things in between that he didn’t know and could only imagine. Roads, fields, rivers, woods, moors, peaks and valleys. And so many people. He would meet and pass them all. There was no deliberation and no reasoning. The decision came in the same moment as the idea. He was laughing at the simplicity of it.

“Tell her Harold Fry is on his way. All she has to do is wait, because I’m going to save her, you see. I will keep walking and she must keep living, will you say that?”

JM: Harold Fry sets out on a journey of 600 miles with the belief that if he keeps walking, former co-worker Queenie Hennessy will not die of cancer. In an interview for the Observer, you said about Harold, “The point is that he pledges to do something against the odds, in order for her, too, to do something against the odds, because she's dying.” This novel is personal for you. Can you share with our readers who might not know the background, what inspired you to write the radio play and then the novel?

RJ: I began writing the play version of this story when I found out that my father was dying. He had gone through a number of operations in his battle against cancer – each of them more grueling. When he was finally told there was nothing left to be done, and that he had a matter of weeks to live, we were all devastated. I began writing the story of Harold then. In my mind it was a tribute to my father, and a testament of my love for him, I suppose, though I never told him about the play and I knew – in my heart – that he would not live long enough to hear it. I think it was my escape. My way of coping with my huge grief. This is what writing is for me. It is the thing I do in order to make sense and shape out of things and emotions that hit me without sense or shape.

JM: The book is indeed a beautiful tribute. Harold has no map, no proper shoes and no idea of really where he is going, but he presses on. He’s not someone who seems to have ever pressed on with anything, yet he finds within himself the courage and strength to do so. How did you make his completely impossible mission believable?

RJ: It is important, I think, that while I knew Harold Fry would make his journey, this is something Harold himself does not know. He has moments of great doubt and great fear but he keeps putting one foot in front of the other. This is, for me, a bit like the process of writing. Even when I feel huge doubt and uncertainty, I somehow stick with it.

JM: I think many of us can relate to the doubt and uncertainty. Your characters are flawed and gritty, with endearing and frustrating qualities, just as in real life. Sometimes secondary characters add color and balance in a novel, but in your story, the secondary characters play key roles in pivotal moments. How did you develop this important layer to the story?

RJ: I didn’t consciously work to do this; it is maybe a reflection of the way I see the world. I think that key moments in our lives are often only that way when we look back on them. They come from small, unexpected places.

JM: You mentioned in a Random House interview that you are moved by strangers. This is evident in the compassion you show for the immigrant doctor who settles for janitorial work in England and the garage attendant with a heart who inspired Harold’s journey. Is there a particular stranger who has changed your life?

RJ: Strangers change my life all the time. I see someone doing something and it makes me think or see life in a slightly tender, new way – today I saw a man trying to buy a coat for his wife and the way he held her arm and kept showing her new coats, none of which she wanted, moved me. But equally, I suppose, strangers come into your life and they become not-strangers. My husband, for instance. I remember clearly the first time I saw him and how I couldn’t stop watching.

JM: I love that! You have created a novel relying strongly on back-story, yet each step of Harold’s journey thrusts the narrative forward. The reader is walking right alongside him, feeling the blisters and cuts on his feet, the lightheadedness he suffers when dehydrated, his joy at discovering the natural world. What are your thoughts on weaving back-story into narrative?

RJ: My thoughts about back-story are very definite. I hate it when information is thrown at me, at the writer’s convenience, but without the story earning it. I love discovering the past, the secrets of the characters I read about and I believe they have to blossom out of the story, as opposed to invading it.

JM: Readers who are also writers can learn so much about the art and timing of withholding and revealing information in your novel. I am awed by the intricate way you delivered your story, unfolding it like a map in front of the reader. If not done well, this method can be contrived, but your delivery was sheer magic. How did you pull that off?

RJ: I am so glad you feel I pulled it off. I worked terribly hard at it. As a writer, I keep putting myself in the place of a reader, and challenging myself to look at what my reader might be thinking and wanting of the story so that I can play with that expectation and challenge it. I think you have to be very careful about what clues you drop and where. Readers are extremely quick to pick up the slightest hints. So I think you have to keep those things to a very bare minimum. Also assume your reader is as alert as you are.

JM: An NPR review quoted you as saying, “Partly because of his own upbringing, he’s not really equipped to get in there and sort things out…He is on the sidelines of his life, and what I find moving about him is that he moves into the middle.” Much of the novel’s message relies on what is not said, in a way, say, a Jane Austen novel might. But yet, toward the end there is such a raw truth to Harold’s thoughts and words. It’s as though Harold undergoes a form of psychotherapy, from denial and repression to honesty.

RJ: Well yes, I think he does. He confronts all the things he has been afraid of. I am very moved by the way most of us have very ordinary vocabulary with which to deal with the biggest things. And sometimes those words may seem overused and clichéd – but they are the best we have. What Harold learns, I think, is to hold out his hand. To ask for help and to offer it too.

JM: I like that you wove in his wife Maureen’s perspective. The journey is, in a way, as powerful for her as it is for Harold. Without giving away the ending, did you foresee how this story must end or did it unfold before you as well?

RJ: I was very clear about where the story was going, just as I was clear about key ‘beats’ that I wanted the story to hit. What I often didn’t know was how I was going to achieve those. I had to rewrite chapters and scenes and dialogues many times before they felt right to me. And I agree about Maureen’s journey. In a way, hers is more difficult than Harold’s because she doesn’t choose to make it and because it happens within the space of four walls.
JM: I thought the audio version was phenomenal. What did you think when you found out the great Jim Broadbent would become Harold Fry?

RJ: I was delighted. In fact I had worked with Jim Broadbent as an actress and as soon as the audio book was planned, I suggested him. I think he has done an extraordinary job. He has a different voice for every character. And he breaks my heart.

JM: Swoon! You also mentioned in the Random House interview that you set out to prove to yourself that you could write a book and that Harold’s journey and your journey went together. Like Harold, you succeeded marvelously. I, for one, am eager to read your next novel. Will you share a bit about it here?

RJ: My next novel, Perfect, is set in 1972 when two seconds were added to time. Something happens to my hero, an 11-year old boy; something terrible that means his life can never be the same. And the question is, would life have been different without those two extra seconds? I have just finished the first draft so it is ever so difficult for me to summarize it. Really I want to sit you down and tell you everything!

JM: I'd love to hear it! Is there anything you wished I’d asked, but didn’t?

RJ: I think you asked very good questions..And I thank you for them.


Thank you so much for joining us today! Readers, my New Year’s wish for all of you – may you press on toward that elusive something against the odds, and succeed.