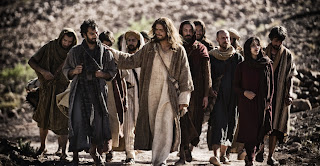 My family and I have spent the past month eagerly awaiting each installment of The Bible--the five-week series created and produced by Mark Burnett and Roma Downey. (Is it weird that my mind always hears "Jr." after her name?)

After last night's final episode, I started thinking about books I've read that have been inspired by biblical stories. Here are a few:

East of Eden by John Steinbeck

Steinbeck's ambitious novel is chock-full of biblical references, mainly from the book of Genesis. In fact, the title comes from Genesis 4:16: "And Cain went out from the presence of the Lord and dwelt in the Land of Nod, on the east of Eden." Throughout the story, Steinbeck repeatedly ties together his themes of brotherly love, self-destruction, family struggles and strife with biblical references, particularly found in the story of Cain and Abel. In fact, most of the book's characters are named with the C/A pairing: Charles/Adam, Caleb/Aron, Cathy/Abra. Steinbeck also references the story of Jacob in Genesis 27, where Jacob and his mother trick his blind father into giving him his brother Esau's blessing--with Caleb and Aron vying for their father Adam's acceptance and approval. If you've never read East of Eden--or if it's been years since you did--I highly recommend you read it soon. Awesome story!

The Red Tent by Anita Diamant

Diamant takes a minor character in the Bible, Dinah, daughter of Jacob and sister of Joseph, and tells a first-person fictionalized account of her life. I read this years ago and, while I didn't love it, I did enjoy the idea of taking a lesser-known biblical character and telling a story through her eyes. The main thing I took away from Diamant's book was that men, in that time, were considered robust and attractive based on how many teeth they had! Something I never considered but surely, in that pre-dental hygiene era, one would be lucky not to lose teeth to decay. I should probably reread it and garner a better appreciation for Diamant's deeper themes she obviously worked hard to convey.

The Handmaid and the Carpenter by Elizabeth Berg

Anyone who knows me well knows I'm a huge fan of Elizabeth Berg and one of my favorite novels of hers is the imagined love story of Mary and Joseph. The Bible tells us little about how the earthly parents of Jesus met and fell in love. Fortunately, Berg's creativity lets us see what might have brought them together and how they forged a life as mother and father of the chosen son of God. I keep this short novel among a stack of Christmas books I reread during the holidays--not every year but as often as I can.

I read this book years ago--at the urging of a friend--and I'm tempted to reread it to see why it captivated me so. Way before the notion of texting and driving, I am ashamed to admit that I remember reading this book while driving. Apparently I couldn't put it down. Redeeming Love tells the story of Angel--a prostitute during the California Gold Rush of 1850--who meets a man named Michael Hosea who loves her in spite of her past. It's based on the biblical story of Hosea and his promiscuous wife, Gomer, and showcases the themes of unconditional love, forgiveness, redemption and self-acceptance.

I'm sure there are plenty of novels out there that retell classic biblical stories; these are a sampling of those I've read and appreciated. While it may seem ambitious to take a biblical story and create a fictional account of those characters or themes, it's certainly been done and done well by others. Are you up to the challenge?
Posted by Pamela Hammonds at 11:00 AM

Email ThisBlogThis!Share to TwitterShare to FacebookShare to Pinterest
Labels: Pamela Hammonds, Redeeming Love, The Bible, The Handmaid and the Carpenter, The Red Tent