Does my middle look saggy, or is it just me? 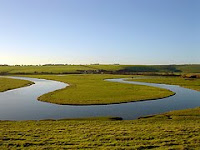 There's a popular term among writers: The Sagging Middle.

I've experienced it myself, mostly when I was flying by the seat of my pants and writing without any idea where I was headed – known as "pantsing."

But I've discovered something else this week: The Meandering Middle.

But I'm not talking about the story. I'm talking about the writer.
I'm slightly beyond the middle of my current manuscript – about 47,000 written of my anticipated 90,000. I'm using a detailed outline for the first time, so I know exactly where I need to go next, and it's moving along at a nice clip. In fact, I've even decided to up my personal word-count challenge so I can get to "The End" faster because it's going so well.

It doesn't seem like my middle is sagging. In fact, I'm just about to enter the portion of the story where so much stuff hits my characters, they almost can't stand it. So, I'm not bored writing, and I hope my readers won't be bored reading when they come to this point.

What's annoying, though, is that even though my middle isn't sagging and my enthusiasm isn't dragging, I'm getting distracted. Even with my handy-dandy outline to keep me on track.

And guess what? It happened to me the last time, too. But that time I quit right in the middle. I did not have an outline that time, so I'm certainly seeing the exponential value in this nifty tool.

So, what's distracting me, you ask?

My attention has been grabbed by the new story idea that's rambling about in my brain. The next new thing. The thing I now can't wait to write when I finish writing and revising ALL THE THINGS YOU ARE. I had a glimmer of the unique setting before, but the "what if?" hit me between the eyes last night.

When I was tired and clueless in the middle of writing the last manuscript, ALL THE THINGS YOU ARE called to me like a siren of the sea, and I shipwrecked. I made the transition as if I were dating a boy who just didn't thrill me anymore and a newer, fancier model came along and asked me out. I said yes. I had no commitment to the old story other than the time I'd put into it, which wasn't a little … but maybe wasn't quite enough.

Well, this time, I'm not jumping ship. I spent too much time on that dadgummed outline to quit now.

Besides, I still love the story. We're comfortable with each other, and I'm in it for the long haul.

But it doesn't mean I can't cheat a little on the side. You know, just a coffee date now and then to say hello and catch up on what's new with Shiny New Story. Like they say, just because you're on a diet doesn't mean you can't look at the menu.

So last night, I allowed my mind to go totally gaga over the new story for a few hours, then again this afternoon. I wrote a potential nutshell synopsis, then honed it down to an elevator pitch/logline. I conducted some quick and dirty Internet research. (That's what researchers call it, I promise … I learned the term in grad school.) I took notes, brainstormed a little, walked around in my characters' brains as they faced the day, just to see what kind of cereal they eat for breakfast.

But now I'm back to my current manuscript. I'm not giving up. I just needed to check out the competition for a few hours.

I'm happy I went to the trouble of spending a month to make that outline. It's kind of like wedding vows:
Me and ALL THE THINGS YOU ARE … together forever. Or at least until "The End" does us part.

I won't grieve long. When I'm a novel widow, I'll already have my next partner all picked out.