When my children were born, I read to them as soon as their eyes could focus on a page. They devoured their first books—literally! Teething rings had nothing on board book versions of Goodnight, Moon! or The Runaway Bunny. 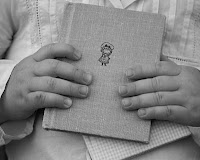 I was raised a reader, not by example necessarily, but by encouragement. Books were readily available and school librarians were some of my favorite teachers. But I think raising a writer calls for a unique approach.

Having the necessary tools available certainly helps—paper and crayons to start with, advancing to pens and computers later. But learning the structure of a good story is something I wasn’t taught until later in life. In fact, I’ll admit I’m still learning the components of writing fiction, long after I feel I’ve mastered the basics of grammar and spelling.

After I wrote my first manuscript and then took the bold leap of allowing others to read it, I was shocked to learn how much I didn’t know about the elements of story. Point of view issues abounded. “Head-hopping,” Kim wrote frequently in the margins. Joan kept encouraging me to up the conflict. Me? Conflict? I avoid that at all costs in my personal life.

Determined to plant early seeds for my daughter, should she decide one day to be a writer, I’ve started grooming her, so to speak, as she learns to read. (I have two teenage boys who raise an eyebrow if I try to offer a helpful writing tip, so they’re exempt from this experiment.)

As a preschooler, my daughter eagerly accompanied me to toddler time at our local library. The librarian always introduced a book by stating the title, the author and whether it was fiction or nonfiction. When the librarian would ask what nonfiction books were about, a gaggle of toddlers would shout, “Real stuff!”

So, I took her lead and began to use our time at home as an opportunity to do more than just read texts. I began by naming the book, the author and the illustrator. While reading Stellaluna, I might remind my daughter that Janell Cannon also wrote Verdi plus she illustrated her stories. Books became more than just objects on the shelf; they were written by authors, illustrated by artists. We read bios when available and talked about the individuals as though they were friends. Once we even emailed an author and got a personalized response.

While reading, at times I'd pause mid-page and point out literary devises such as alliteration, and I took pride in the fact that, at three years of age, she knew what an onomatopoeia was. (Even though I never remember how it’s spelled!)

Now, as we’ve progressed to chapter books, I’ve upped the ante by introducing point of view. We’re reading a series of books about a horse farm with characters who are growing up and moving on as the series progresses. I stopped in the middle of book five and said, “Who were the first stories mostly about?”

“Yes,” I said. “Ashleigh is still a character, but now we know only what Samantha is thinking or feeling since it’s in her point of view.”

We talked a little about conflict—about what makes a story interesting—how if everything on the horse farm was always good, then the book would get pretty boring. And if Samantha’s horse won every race, then the parts about the track would be predictable and we’d lose interest.

I’m careful to not make reading too much about the craft for fear she’ll view our “snuggle time” as a sly version of home-schooling. But I want her to know there’s more to building a story than just tossing text onto a page, so we also discuss protagonists and antagonists, conflict and resolution. Big words, maybe, but she gets it in the same way she recalls names of dinosaurs and absorbs concepts such as evaporation and pollination.

My goal here is two-fold: I want her to appreciate writers and illustrators—what makes books treasures, plus I’d like her to understand what’s involved in composing a good tale. Maybe someday she’ll become a writer. Or maybe she won’t. If she does, I’m betting her first critique partners won’t have to do quite as much work as mine.
Posted by Pamela Hammonds at 5:00 AM