I'm kind of a pack rat. Okay, "kind of" is putting it mildly. Let's say this: I'm not going to appear on reality television anytime soon clutching a Big Mac box left over from 1978, but I did recently come across a huge bag of letters written to me in the mid-'90s, and they did not land in the garbage bin.

So what happened the other day was sort of unusual. I was emptying the dishwasher, and found a chipped ramekin. I think my son loaded it poorly, and the water pressure knocked it around enough to break away a piece of its edge. I started to put it in the cabinet, and then on second thought, tossed it in the trash can.

For me, this was huge. Another day (maybe yesterday, or tomorrow), I would have put it away with its seven mates. Why? Just in case, I suppose. In case the day came when I needed to press the entire set into use at once, something that has never happened in the six or seven years I've had the things. Instead, it would annoy me every time I grabbed the damaged guy (we do a lot of dipping at our house), only to stick it at the bottom of the stack to rise and irritate again and again. But that didn't happen. Instead, I trashed it.

I did the same thing a couple of weeks ago in my garage. Sick of the tumble of boxes and crates and basket of loose junk cluttering the half my car doesn't demand, I skedaddled to Home Depot, bought myself a couple of huge laminate storage cabinets, and began sorting through the junk. (This is when the bag of letters showed up.)

A water-stained box taped up before my kids were born exhumed binders of notes and syllabi from my senior year of college. I took a second to admire my once-neat handwriting, then took a deep breath and tossed the bulk into the recycling bin. I retained only a folders-worth of term papers (it's terrific fun to revisit the pomposity of college, and my guess is I'll enjoy it just as much when I'm 85--perhaps even more), and felt no remorse or loss in letting go of the rest. In fact, I felt lighter, freer, better.

The next box was stuffed with cookbooks I'd long forgotten, much less used, and its contents met a similar fate. I held on to the apple cookbook written by the mother of an old friend, recipes I'd been called to be a guinea pig for back in junior high, and The Early American Cookbook was spared. The rest I hauled to Half Price Books, where they gave me ten bucks for the lot. (I guess there's not a lot of demand for Campbell's Soup recipes or Richard Simmons these days.) 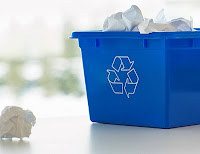 My husband/fellow pack rat has even more junk than me. His things I left alone. (This is the man who replied, "That is correct," when I, exasperated, once snarled, "So let me get this straight: we are going to store this box of Army undershirts forever, and never look at them again, and when we are dead, the kids will throw them out?" At least he had the decency to look sheepish.) Besides, several tubs worth were comic books painstakingly tucked in plastic sheaths; I might need the money someday. (Sh!) Those got stored on top of the shiny new cabinets. They weighed a ton, too, and we had to reinforce the cabinet tops with plywood. Still, we already had it, and like I said: money.

Speaking of money and books, another item popped up, still in its mylar wrapper. That one I'm hanging on to; if something happens to Madonna, I'm betting the value will skyrocket. Just don't ask why I own it.

Wow, Elizabeth, you are likely thinking by now, it's really great you again possess the recipe for Kadi's Caramel Apples, and it's good to know yours is the attic to rob if I ever need a stash of ugly brown T-shirts, but what does this have to do with writing?

Simply this: by habit, or stubbornness, or plain old nostalgia, we hold on to things. That includes our writing. Sometimes it's okay to let it go. There are projects we may have started, once loved, and then abandoned, and while I'm not saying the actual trash is necessary, a distant file and a bit of amnesia are not always a bad thing. Too much old stuff, too tight a fist on a manuscript that never found a home, might be clutter that keeps us from the next thing, the new thing, even the best thing. There's a time to let go. Only we can determine when--and even how--but knowing that, and accepting it, are as much a part of being a successful writer as the writing itself. Well, that's probably an overstatement, but not by too much.

One of my favorite childhood reads was Where the Red Fern Grows, about a boy who struggles mightily to obtain a pair of hunting dogs. When he finally succeeds, he's faced with a new problem: obtaining a coonskin to train them. His grandfather tells him about a trap he can set: simply put a shiny piece of tin inside a ring of nails pounded into a stump on an angle, and the raccoon will reach for it, grab it, and be trapped by his own fist. The boy thinks for a moment, and then, crestfallen, realizes his grandfather is teasing him. "Why all he'd have to do is open his paw, drop the piece of tin, and he could pull it from the hole." True, the grandfather tells the boy, except the animal won't. When the boy sets the trap, he sees for himself the grandfather told the truth: once that raccoon had grasped his prize, he refused to let go. Even to save his own life.

Old letters from lost friends; a chipped ramekin; a moldering cookbook; a fizzled half-written manuscript; a circle of tin auguring peril. Some things we keep, but others should be let go, freeing up space, or time, or air to breathe in the new. Sometimes it's obvious what should go, other times it's less clear, but it's worth the minute or the hour to evaluate, to reminisce, and sometimes, with writing, to clear a corner under the bed and finally let it go.
Posted by Elizabeth Lynd at 8:35 AM