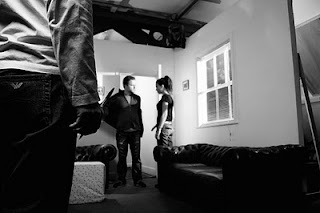 The author, in his work, must be like God in the Universe, present everywhere and visible nowhere. ~ Gustave Flaubert

Last time I posted, I tried to give a basic primer in point of view, from my position as facilitator and definitely not expert. I promised I’d talk a little this time about how or why I select a certain point of view when I write.

Well, here’s the honest-to-God truth: Point of view chooses me.

Generally it just seems a story idea comes to me with point of view already chosen for me.

Sound a little nutty? A little too out there for you?

It could sound like a lot of hooey to me, too, because I tend to be a skeptic and I’m on the verge of cynical. But I am also a big believer in allowing something bigger than me to guide me in my writing and lots of other areas of life. Because I’m a skeptic, when I allow myself to be guided, it feels pretty overriding. Just plain “right.”

But I have stopped to contemplate the how and why of the points of view I’ve selected … or that have been selected for me.

Let’s consider it as given that first person tends to be very intimate. The reader is privy to nearly every thought the character has (of course, that brings to mind another kind of narrator or point of view I failed to mention last time: the unreliable narrator! Yikes!). Third person tends to be at least a little more distant.

As for me, here’s the way I figure it.

When I have a story idea, it’s almost always a very visual idea inside my head. I don’t tend to think in words alone. I am not an auditory learner at all. I struggle to listen to audio books, though they’ve come in handy at times. I really didn’t even like to be read to as a child much, and didn’t particularly enjoy reading to my own kids when they were small, poor little things. I always have to have my hands or eyes on something else while I’m listening to someone read. I am definitely tactile and probably almost as visual.

So when I am “seeing” a story in my head, I’m usually seeing it a certain way. I’m either seeing it as though: a) I’m an observer, or b) I am the character(s).

My previous manuscript used two third-person points of view. The characters, a mother and son, were extremely close and had almost identical worldviews. The story came to me in third person, and I suspect it’s because if I’d tried to write two first-person points of view, it would have been very difficult to tell the voices apart. Third person gave me a tool to show each interacting in the ways that made them different.

My current manuscript, ALL THE THINGS YOU ARE, is written in two first-person points of view. I can hear each voice, one an elderly white woman, the other a much younger African-American woman, from very different backgrounds and with very different worldviews, clearly in my head. They have different ways of speaking and dealing with the things around them. I can’t imagine this story in anything other than first person.

I like to consider it and explain it from a filmmaker’s point of view. Typically, when you watch a movie, the filmmaker either selects a fairly distant angle on a scene, where you (the audience) are observing the characters interacting with each other or with their environments, or follows right alongside the character, allowing you as the audience to see the scene just as the character is seeing it.

That’s how it is my head. And I’ve tried to fight it on occasion and it just didn’t work at all. I can play with tenses, using past or present, even change a story from one to the other, but I can’t seem to mess with point of view. It is what it is.

I suppose if a story came to me in an omniscient point of view, it would be similar to a camera panned all the way out, almost as though I were above a roofless setting, able to see every single thing going on below, no matter where it occurred or who was hiding what from another character.

I’m not sure how second person would look using this idea. And I doubt I’ll ever write a second person point of view, because I really can’t picture it using this model at all. I bet someone else could, though. Someone not me.

It may be that if you are a different kind of thinker or learner, you have to intentionally choose point of view, that you see it far differently than I do. It would be an interesting survey to match learning types with something like selecting point of view.

But if this works for you, it might help you know which point of view is right for your new story.

I’d love to hear how our readers select point of view. Do you have a similar experience, or have you actively selected whether to use first, third, or some other point of view?