A mother’s heartbeat is the song of her child, connecting her child to the world. You are the Earth mother’s child. Hear her vibration and connect to her pulse, for the drum speaks through her to those that listen. – An elder’s wisdom

This morning as I sat here in my “office” pondering what to write for today’s post I felt a slight shiver and promptly opened all the windows in the house. This time of year usually makes me long to lie on a carpet of fiery leaves and stare in wonder at the ceiling of a forest cathedral. (Such churches are in short supply here in Dallas, which is perhaps why I still don’t consider it home despite having lived here for thirteen years.)

It isn’t the forest I long for now, but a river. The smooth triangular shaped rock I plucked from the banks of the Saugeen six years ago today sits beside me on my desk as I write. 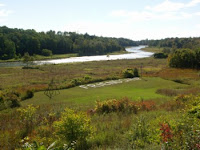 I’ve been to many places while researching for The Oak Lovers, following Carl Ahrens’ footsteps all over southern Ontario and western New York. Knowing that little remains of the reservation where he was once adopted into an Ojibwa tribe, I almost skipped making the trip to Southampton in 2004. It’s true that the rock garden and the amphitheater were not there in my great-grandfather’s time, but he surely stood on the bluff and watched the silvery light dance off the Saugeen River. I’d seen more dramatic landscapes, certainly, but never before had I heard music in the rustle of branches or felt such a profound sense of peace and belonging. My cousin, traveling with me at the time, dared voice the thought: “His spirit’s here.”

I saw no specter, heard no voice from the past in any conventional sense, but as I nodded my entire concept of the world and what comes after we leave it altered. My pulse, racing up to that point, slowed. The names, dates, places and events I had come to Canada to learn about were gently swept to a far corner of my mind. I saw them for what they were then; a thousand trees that would prevent me from ever seeing the forest. I took a deep breath, but before I could fully form the question in my mind, I felt a strong urge to get in the car and continue our journey to Tobermory. My vision quest had begun.

Three hours later and sixty-six miles north, I approached a ceremonial teepee in the woods behind an Ojibwa-themed campground. I expected a cheesy re-enactment of a full moon ceremony for the benefit of tourists, but curiosity led me to join a circle of eight strangers around the campfire in the center of the teepee. I was at least twenty years younger than the other women and the only one not holding a hand-made elk skin drum. The Ojibwa elder smiled and bid me welcome in her native tongue. As I watched her construct a tobacco offering resembling an umbilical cord, I realized that my need to be there was no longer about my book, or even my ancestor, but about me. I desired to listen with my instincts instead of my ears, to put my faith in those wonders that can be neither seen nor explained, merely experienced.

I followed her lead: one knot for myself, one knot for my children, a third for my ancestors, and a fourth for a special friend. The elder sang as she worked, a haunting melody in a language both unintelligible and oddly familiar.

Each woman in turn stood in front of the fire and said a payer of thanks. Some addressed God, others Kitche Manitou (Great Mystery). After dropping the tobacco offering onto the fire, each added a cedar bough, which smelled heavenly. Next came a water offering – one spoonful to the ground, one to the fire, one to the rock, and one to yourself.

These are the things I learned that night:

I can’t make a buffalo call to save my life, but I can feel it in my bones.

Crowded teepees are sweltering even on cold nights.

Time travel is possible. Listen to a native drum with your eyes closed and you'll forget which century you're in.

The combination of burning cedar, sweetgrass and tobacco will keep you blissfully disoriented until you can fully get the smell out of your clothes and hair. You will miss the intense dreams when you do.

I rose before the sun the next morning, something I never do, and this view greeted me. 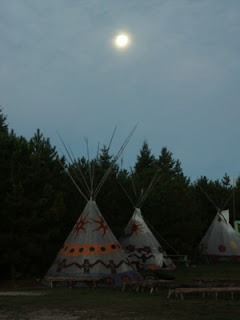 What about you? Have you ever been on a vision quest or experienced anything that has altered your perception of the world around you? If you write, how has this affected your work?

Note: Painting is Indian Camp by Carl Ahrens, oil on canvas, undated.
Posted by Kim Bullock at 4:00 AM