A Matter of Perspective

By Pamela
My seven-year-old happened to be watching television recently when a commercial played for St. Jude Children's Hospital. As Marlo Thomas' voice-over faded, my daughter turned to me and asked, "How come, when a kid goes into the hospital, someone shaves his head?" I looked back at the screen and thought, That never occurred to me. So, I told her that sometimes, when people get cancer, doctors give them medicine to help them get better, but the bad part is, it usually causes people to lose their hair.
From my daughter's limited perspective on kids and cancer, hospitals and chemo, she assumed a bald head equated to someone having shaved it. 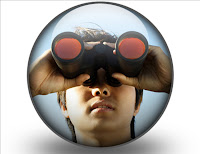 Later I thought about how this applies to characters and perspective. Unlike point-of-view, which Julie has explored recently, perspective isn't about who's telling the story; it's about how the characters spin their unique take on it.
In order to really nail perspective, you have to begin with fully fleshed-out characters. As examples, I'm illustrating two characters from television shows I watch: Dr. Temperance Brennan from Bones and Michael Westen from Burn Notice.
If you only occasionally tune in to watch either show, you may not understand why the characters react the way they do when placed in both everyday and unique situations. But as someone who has seen pretty much every episode of both series, I enjoy seeing how writers use these characters' profiles to determine their behavior.
For example, Dr. Brennan is not only a gifted forensic anthropologist, but the reason her personal life is usually a mess is because her parents abandoned her and sent to live in foster care. In one early episode, she discovers her mother's remains and solves her murder. In another, her father kills the head of the CIA--and both parents were bank robbers when she was a child.
In Burn Notice, Michael Westen is more than a burned former international spy. He's also the son of an overprotective, chain-smoking hypochondriac mother, and his father abused both him and his little brother. His best friend used to inform on him to the FBI, and his ex-girlfriend is a former IRA explosives/arms specialist. Can you see how he might be a little slow to build lasting relationships?
While all this backstory rarely surfaces, it goes to forming these characters' perspectives. It flavors and tempers how they react to the characters they share screen-time with. It influences their speech and body language.
When crafting a novel, it's imperative I know my characters' backstory like it's my own. In my current WIP, my main character grew up as the only child of an Air Force colonel and attended four different high schools. She marries a man for the stability he seems to offer her. "I latched onto Kent because I loved his family more than I loved him. Do you know his parents live in the same house his mother was raised in? That his grandfather named the town?" When she mentions being upset about a family crisis, she thinks about a "constricting knot under my sternum," not a burning in her chest because she's also a nurse. And when her son seems to be aging rapidly due to stress, he reminds her of a child suffering from Progeria, not a kid with that aging disease, as I might describe him.


Another character I'm writing is a 90-year-old widow who never had children. When schools bring children into her retirement village during the holidays, does she tear up and delight at their talent? Not at all! "It's the time of year I most yearn for hearing loss," she says. "Or at the very least, dementia. Tomorrow, lucky Helen Pierce won't remember how Rudolph got butchered by a five-year-old."
It's all about perspective. How characters see the world through their cataract-afflicted vision. How a burned spy has trust issues. How a child views someone her own age with a bald head. Did she lose her hair from a horrible side-effect or did a nurse shave it when she entered the hospital?
Stay true to who your characters are. Like you, they are unique...but possibly, they aren't like you at all.
***

For an in-person perspective from the six of us at What Women Write, join us Jan. 17 at Richardson Public Library at 7 p.m. as we present to the Writers' Guild of Texas' monthly meeting. No charge for admission.
Posted by Pamela Hammonds at 5:15 AM