Recently Pamela blogged about beginnings. Also recently I was talking with Susan about endings. I’ve been critiquing her manuscript, The Angels’ Share, and she made a comment about not being entirely certain how the story was going to end, even though she was very close to being finished. It got me thinking about the promises writers make to readers, and how we’ve all read books that started out beautifully and didn’t end up where we thought they would or, rather, where we thought they should. Just as every book doesn’t grab every reader, it’s hard to please all readers once you’ve nabbed them at the beginning!

I told Susan I’d changed the conclusion to The Bodley Girl at least four times and, even though The Architect at Highgate is 99 percent finished, I’m still tweaking the last scene. I advised her to play around with a few possible endings, by writing down several alternatives to see if one spoke to her more than the others. 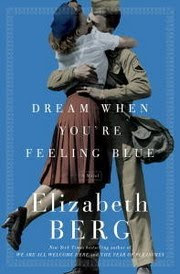 I recently finished Elizabeth Berg’s Dream When You’re Feeling Blue. I enjoyed the book, a WWII-era story featuring three very different sisters, who embark on letter-writing campaigns to soldiers, including two of their recently-deployed fiancés. Berg weaves the tight narrative with touching emotion and believable wartime observation. It was a fast read and when I breezed toward the end, I did a double take at the twist. The story forwarded about thirty years, which was a little unexpected in itself. But I hadn't anticipated the outcome, filled with sacrifice and love. There were subtle hints along the way that I later recognized as key. Not liking my endings pink and neatly-tied, the more I thought about it, the more I liked the conclusion. There might have been other ways to end the book, maybe Berg wrote a list of her own possibilities, but this one felt perfect.

At the conclusion of the 944-page Crimson Petal and the White, Michel Faber’s bawdy Victorian tale of love, lust, greed, and sorrow, I actually thought the dance stopped too abruptly and wondered why he’d jilted free the reader. There again, after some contemplation, I wondered how I would have ended it differently? Here I am, years later, pondering the story. And I haven't even mentioned Sarah Waters’ Little Stranger and Poppy Adams’ Sister! I’m still reeling from those endings!

Just as beginnings must entice the reader into a long and winding dance, endings must release the reader, satiated and somewhat spinning. As writers, we need to deliver what we’ve promised, whether it be a ballet, hip-hop, salsa or, yes, the twist.

A perfectly crafted last line can sear a book into our memory. Here’s a list, originally from the American Book Review.

And from the lovely novel, The Distant Hours, by Kate Morton (who will in two weeks stop by WWW!):

“The door closes behind her, leaving the ghostly lovers alone once more in the quiet and the warm.”

If you have a favorite ending or last line, tell us about it.
Posted by Joan Mora at 5:00 AM