Recently, at our What Women Write presentation to the Writer’s Guild of Texas, I spoke on the topic of social media, first in general, then specifically as it relates to how our group functions. I thought I’d share some of the highlights with you here.

You may say, “What is this new thing, Social Media, of which you speak? I’m a writer! I like to be alone. Sounds scary.”

Well, if you think social media is a new thing, you’ve got another think coming. Some of my earliest memories are of sitting on my grandpa’s lap while he contacted people all around the world on his HAM radio. I can still hear him clearly in my mind reciting his call letters and hoping for a ping from someone else. Years later, my dad travelled frequently in desolate stretches of Wyoming and Colorado for his job. My stepmother felt more comfortable knowing if he got in trouble, he could contact another driver on his CB radio. As a minister, he developed a persona with his handle, “Reverend Blue Jeans.”

But think back even earlier. Smoke signals, anyone?

Nope, social media is nothing new. The only difference now is it happens so much faster. Technology simply advances more quickly all the time, which can make it scary when we become used to something and someone wants us to change.

I swore I’d never Facebook. I was a dyed-in-the-wool blogger. Then I had teenagers. And I needed to “check up” on them. :) And I discovered how much fun Facebook was. Soon, I abandoned my personal blog (and joined forces with the women here!). I moved on.

Though my teenagers might be snickering behind my back because they’re already onto the latest, greatest thing their parents haven’t discovered yet, three social media avenues seem to be the most popular right now. Here’s how I like to define them:

Twitter
Whispering in the midst of a noisy crowd and wondering if anyone will hear you … or even notice that your mouth moved.

Blogs
Delivering a speech in the middle of the forest and wondering if anyone will hear you—the most important question, of course, being, “If nobody leaves a comment, did you really blog?”

Facebook
Shouting to 400 of your closest friends and wondering if anyone will hear you. Then hoping they will answer, or at the very least, “like” what you said. When you’re really lucky, a friend may scribble an unrelated message on your wall. That means they actually came looking for you.

It can be a little intimidating to choose not only what social media to use as a writer, but how. It might be helpful to think about the following when decided what will work best for you. (Please note the cute way I use words that start with P to give you a mnemonic device. I like mnemonic devices!)

First, be passionate and purposeful, not passive or plodding. In other words, don’t keep using a social media avenue that doesn’t interest you. It will likely die a slow, stinky death. Have a plan, make goals, and enjoy it! If you don’t enjoy it, what’s the point?

Second, be persistent, but not pushy. Be regular, be interesting, but don’t hog the road. (Cough, cough … fingers pointing back at me. Always working on that brevity thing that eludes me.)

Finally, be personal, not just a plugger. Do you know any social media dive bombers? I do. Please don’t simply plug yourself (your latest blog post, your latest book, your latest speaking engagement) then run away—you have to interact to gain loyalty. On the other hand there is such a thing as TMI … or, as we say in writing lessons, no “walking the dog!” We don’t mind knowing that your dog did the most amazing trick ever, and if you have photos, that’s even better. But we don’t need to know every time you leash her and head out the door.

Bringing it back to What Women Write …

I evaluated our use of social media over the last few years in preparation for our presentation. I wanted to keep it real. What I concluded is this:

The six of us are pretty passionate about the What Women Write blog. We write consistently and try to mix it up. We actually keep a schedule, though you might not notice so much on the surface as we subsitute or pinch hit for one another as needed. We attempt to include personal essays as well as musings on craft, industry news as well as interviews with authors or industry personnel. We don’t succeed one hundred percent of the time on consistency or variety, but it’s not for lack of trying. BUT ... we are not very good about interacting with our readers. Sometimes we wander over to a reader’s blog and leave a comment, but not very often. We are not intentional about it, and we know that blog traffic is usually driven best by … networking! We've decided to make a concerted effort to be more diligent about this.

We also use Facebook. We are a little guilty about plugging on Facebook—dive bombing just to let our followers know a new blog post is up. So over the last few weeks, we’ve been attempting to be a little more interesting—sending the folks who have “liked” our page to other interesting articles about writing, congratulating our writer friends on new releases, and so on. We hope you notice the difference and that it doesn’t seem so much like it’s “all about us” in the future. 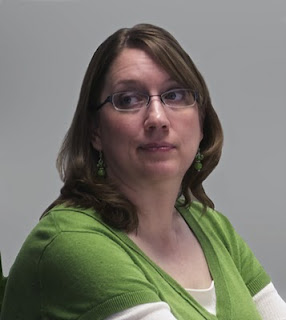 That photo of me to the right? (Apparently the only presentable solo shot of me captured by Rick Mora that night because I'm such a fidgeter!) I was probably talking about Twitter. Our blog posts automatically feed from Facebook to Twitter. There is nothing intentional or human about it. If it weren’t so easy, our Twitter page would be dying that sad, slow, stinky death. (Maybe it is. Has anyone checked lately?!) And the sad news? We probably won’t change there. None of us are faithful Twitterers, so we have decided for the time being to leave it on auto pilot. We’ve made a decision to not excel at Twitter.

One last thought about social media. We’ve learned by experience there’s a huge difference between using social media as a published author or industry expert and using it as a group of unpublished writers. (Or … “I used to think blogging would make me famous.” Ha.)

Bear these things in mind:

As an unpublished writer, it’s all about building an audience (very, very slowly) versus reaching out to a built-in audience. When you’re published, the audience frequently comes looking for you. When you’re unpublished, you’re looking for an audience. Our highest traffic days are usually when we feature published authors, agents, or publishers. The day we had former child actor and newly published author Quinn Cummings as our guest, our stats skyrocketed. We likely won’t be able to replicate that until one of us hits the big time (aka, gets an announced deal on Publisher’s Lunch at the very least!).

Published authors use social media to let their readers get to know them better so they keep buying their books. An unpublished writer hopes her readers will know her well enough to remember her name and buy the book when it’s finally published.

And now, how about you? As an author, an aspiring writer, a reader, or in whatever capacity you come to our blog: What scares the pants off you about social media? What gives you the warm fuzzies?

In other words, how has social media helped or hindered you? Please discuss!

(And … as a bonus, we promise if you leave a comment on here or on our Facebook page, we’re gonna come looking for you! Don’t get too excited. For now, we’re just six women who write, but we sure hope when the time comes, you remember our names.)