Over the last several months, I’ve corresponded with Erika Robuck online via Facebook and through our respective blog comment sections. I first noticed her when we both ran a review of Kate Morton’s Distant Hours around the same time. After sharing some favorite titles, it seems we share a lot of the same taste in books, steering toward stories which weave together the past and the present. I also learned we hail from the same state, Maryland. So I was thrilled when she agreed to run a guest blog for us. 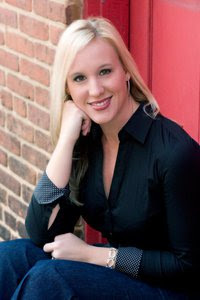 About Erika (from her website):
Erika is an historical fiction writer. Her first novel, RECEIVE ME FALLING, was released in March of 2009. She is also thrilled to announce a two-book deal with NAL/Penguin for her novel, HEMINGWAY'S GIRL, and another historical novel.

Erika has a keen interest in all things historical, and spends her time reading, writing, researching for her writing, and visiting local, national, and international historic sites.

Erika guest blogs at Writer Unboxed and There Are No Rules, and has a reading and writing blog at Wordpress. She is represented by literary agent, Kevan Lyon.

I am so thrilled for her and anxious to read Hemingway’s Girl when it hits the shelves next year. Thanks again to Erika for stopping by What Women Write.

It must have started with the old chest in the basement of my grandparents’ house. While my family’s laughter and conversation was a distant echo above me, I fumbled with the clasp on the chest’s polished wood and opened the lid, releasing the smell of antiquity and travel, old papers and photographs. The odor of that musty air excited the thrill of discovery in me. It showed me that my grandparents, who seemed impossibly old and settled, were once young people with exciting lives.

In the chest were painted pictures of my young flirty grandmother and my handsome uniformed grandfather. There was a pack of yellowed letters and piles of black and white photographs: my grandmother leaning into my grandfather on a New York City street and laughing with her sisters, my grandfather horsing around with sailors on a navy ship. He called her Bunny. She called him Bobby. These were my grandparents! My head buzzed with questions as I carried the artifacts upstairs. Did he fight in a war? How long did they live in New York? What was her family like?

Even though I was just a child I could see the tumult of emotions on their faces when I presented the pictures. The flickers of recognition started the stories. It was the picture of my grandfather with a tumble of filthy city boys with cigarettes hanging out of their thirteen year old mouths that caused him to smile.

“We all ran around Brooklyn together—a protestant, a Catholic, and a Jew. We went to each other’s churches and temples, and hitchhiked to Canada and back.” His voice grew quiet and his eyes glazed over. I could almost hear him wondering where they were now.

Then there was another picture of my grandmother from not so long ago, with two women startling in resemblance to her.

“My half-sisters. It turns out that my father had two wives—one here, my mom, and one in Ireland. These are his daughters from Ireland. They found me a couple of years ago and we met up.”

I was flabbergasted. She enjoyed my reaction.

It had to be on that day that my obsession with the past and its connection to the present began. I believe it’s why I write historical fiction. Nothing gives me greater pleasure than finding a photograph or a note that sparks a dozen questions that lead to a story. In my research I’ve found over and over again that these stories want to be known. Sometimes they arrive quietly, almost shyly, as a factoid in a newspaper article or a solitary figure on the periphery of a picture. Other times they come thundering out without coyness or pretense: “My father had two wives.”

My novel, HEMINGWAY’S GIRL, is set in Key West in 1935. Several years ago, I visited the Hemingway house and wanted to write about it. Then I had a dream where Ernest Hemingway told me I had to write about it. A handwritten note from Hemingway to a former lover, his angry article about the treatment of the vets working on the overseas highway left to die in a hurricane, and a photograph of a young Cuban woman at a fishing dock became the ingredients that stirred a story in me that connected the rich and poor in depression-era Key West. The story grew around the facts, and on a recent visit back to Key West I had to keep reminding myself that my protagonist didn’t really exist, though I could see her vividly in the streets and docks of town.

Once day I will write about my grandparents. Their lives would make a rich and fascinating novel. My greatest regret is that I didn’t ask my grandmother more questions while she was alive. Still, I’ll pour through her old photographs, seek interviews with children of her sisters, and comb her letters for clues to the past. If I’m lucky, she’ll visit me in a dream.

It might sound strange, but I think that chest was waiting to open me up to the past that day and I hope my stories will do the same for others.
Posted by Joan Mora at 5:00 AM