Handwriting Analysis on My Protagonists

A few weeks ago author Stephanie Cowell posted an update on Facebook about meeting a woman who was able to tell a great deal about her character from the way she signs her books. Intrigued, I responded that I'd be afraid to know what my handwriting may reveal. A short time later, the lady in question, Betty Rozakis, contacted me and we started talking. She has over 20 years of experience and is the only American to have earned the Advanced Diploma from the British Academy of Graphology. I asked her if she would be able to analyze the handwriting of people who lived long ago and give some insight into their personalities. She said she could. Since the protagonists of The Oak Lovers were my great-grandparents and I happen to have quite a few handwriting samples, I jumped on the chance to find out more. 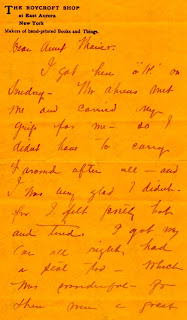 I specifically wanted to know what might have drawn seventeen-year-old Madonna to a much older, married, penniless and crippled man like Carl Ahrens. While quite handsome and a genius, he had a lot of things going against him. I also have a handwriting sample for Carl’s first wife, Emily, whom I know very little about, and wanted to know if I could learn anything about what may have soured that marriage.

Betty and I struck a deal. She asked for handwriting samples and drawings of trees, if possible, from Carl, Madonna and I. How convenient that Carl's specialty was trees!

Here are some of the things I learned, edited a bit for clarity. In this post I'll cover Carl and Madonna's analysis. I'll discuss my own in my next post.

Madonna was a highly intelligent young woman who was sensitive to other people's feelings and ready to help the withdrawn, discouraged and charming Carl. She was quite discouraged and sad herself and had a strong need for freedom, space, and air. She wanted to follow a firm path of action to allow for her ambitious creative talents. She had tall projects that she wanted to achieve. Perhaps her mother made the wrong decision for her in sending her to Roycroft. Your gifted and talented great-grandmother's character needed the systematic Boston Art School. It had more of the correct training that she craved. 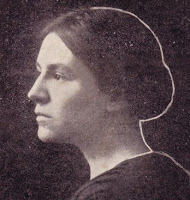 She was a bit too idealistic, romantic and generous in her attitude with Carl. She had confidence in people. You stated several times that you caught your great- grandmother in a few lies. Her character needed to do the right and correct thing and took a personal obligation to 'fix' others....but in a graceful dutiful sort of way. During her marriage to Carl, she chose to cover-up and protect, she was altruistic and self-sacrificing. She had a strong sense of duty, moral courage and stamina. She was consistent, wise, loyal and traditional in her habits. She had a refined loyal calm, was comfortable with routine, but she knew how to protect herself when needed. She was sociable and amiable, but welcomed her time alone. She was quite vigilant and constrained her feelings. Her basic nature needed to have fun and relax along with introspective creativity. She was more able to achieve this once Carl passed away.

As for Carl, you mentioned that his mother never forgave him for choosing his father over her. From her handwriting I can tell that she was an undisciplined woman, more of a pleasure seeking type. Could it be that Carl's father preferred to squash his son's spirit with strict conformity? It doesn't seem possible that a young boy in that environment would be allowed such a choice. Carl's early handwriting reflects this. 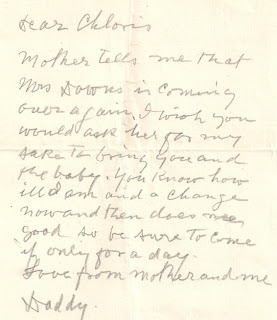 During Carl's early years his character needed to conform in order to survive emotionally, an imposed persona, a stereotyped social attitude. This imposed convention percolated deep in his subconscious. His true self was buried underneath the scars of a wounded human dignity. Discipline - to 'soldier on' against all the odds – a silent misery. He had apparent tolerance, apparent sociability, apparent easy communication, but this imposed compliance, social imitation, and forced adaptation created HAVOC for his subconscious. His buried nature wanted to fight, hit back, break through, hence the 'fighting trees'. As a result – neuroses, fantasies, viciousness, brutality, all hidden behind a 'civilized' easy-going no nonsense social attitude. He was mistrustful, had hypocritical behaviors, extreme skepticism, arrogance and lack of common sense. His marriage to Emily perpetuated his squashed subconscious. From her writing I can tell she had a strict unyielding demeanor. She needed to protect and control and had an intrusive, insensitive character.

When Carl met Madonna she triggered the spontaneous emotional experiences that his character craved. It was a meeting of two subconscious souls....both in need. Carl feared emotional pain and compensated by engaging in pleasurable pursuits. He had a constant need for more. 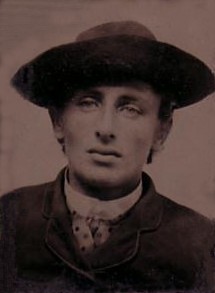 By 1912 [at the height of his fame] Carl gained a self-confidence that didn't exist pre Madonna. He was dynamic, and enterprising but still needed to escape and expand and grow. He was jovial, expressive, sensual and had a targeted purpose. Unfortunately, Carl was unable to reconcile his innermost individuality with the imposed veneer of his upbringing. He hid his unspoken misery in the world of his dreams, as depicted in his trees.

After reading Betty's analysis, I was pleased to discover that she saw the same people I saw, and this confirmed my view that I had them "right."


Stop back two weeks from today and, as Betty would say, have coffee with Kim's subconscious. If you are interested in learning more about handwriting analysis, click here to go to Betty’s website.
Posted by Kim Bullock at 5:00 AM