Now for the secret. Well, here it comes, but put on your sober face. Does thee recollect when it happen[ed]? It was on the day of Uncle B’s funeral. I had a letter on that day, just after tea I went in the nursery to read it. I had not set there long before I heard someone come to the door, looked up, and who should I see but J. Spencer. I said walk in, little thinking he would mind me so good. He came in, got a chair, came set down beside me and went to talking. I was almost scared to death, sat there trembling. He sat as composed as you please, so we staid there and jabbered for about an hour when I ask him to excuse me for a moment. I cut myself upstairs and you may well think I did not trust myself within the confines of the nursery very soon again. That day he sent me an orange. But dear Martha, you see I could not help it. I trembled and was so afraid that Miriam or some one else would come in.

Now Martha, if you show this to anyone I shall never forgive you…

To 21st century eyes this may not look like much of a secret, but in 1842 Amanda, then fifteen, could ha

ve had her reputation ruined if “Miriam” or anyone else happened to find her alone with a gentleman. She would only have made such a risqué confession to a trusted friend. Martha likely kept her confidence, but she also saved the letter, as she saved many other letters from friends and relatives. I imagine she tucked them all away in a special box, perhaps re-reading them when the long winters prevented visitors from coming to call. She became Martha Niles in 1850 and the relics of her girlhood travelled with her, perhaps consigned to the bottom of a truck, unmolested through the births of four children and the death of her husband. Years later her belongings moved to a larger, grander home a few miles away in , until her second husband, too, died. By then Martha was elderly, her health failing, and she retired to her daughter Katie’s home in until her death in 1910 at the age of eighty-three.

The letters survived. They may have remained with Katie for some time, or perhaps Kati

e sent them immediately to her niece, Madonna, then living in with her husband, landscape painter Carl Ahrens. (They are my great-grandparents as well as the subjects of my work-in-progress.) Madonna both adored her grandmother and shared her trait of saving everything. Not only did she guard Martha’s treasures, but she clearly told her children about them. When Carl and Madonna moved to they let the mortgage lapse on their house. They told their grown children to go and collect any sentimental items in the home and leave the rest. Many things were overlooked, but the letters were rescued.

They were in Madonna’s possession when she died in in 1976. She willed them to her daughter, Chloris, my grandmother, who was perhaps the most fanatical pack-rat in the history of the human race. Everything Chloris kept, her daughters Nonna and Siegie also saved because “Momma must have had her reasons for keeping it.” Boxes containing everything from old manuscripts to the registration papers for a long-dead poodle remained in Aunt Nonna’s attic for twenty years after her mother’s death. When the time came to remodel the house, Siegie suggested they send everything to me because, as family historian, I would “know what was important.” 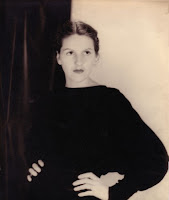 shock when I opened one of the boxes, pulled out an ordinary file folder and a letter from 1836 dropped onto my lap. There were about fifty letters total, all written before 1850. Despite having been passed around for a century and a half, the ink is clear, the paper barely yellowed, and they are infused with the mildly musty scent of an antique bookstore. I skimmed a couple of them, but the mid-nineteenth-century handwriting made for slow reading. With a new baby to care for, I was short on time. As I did with so many other documents that did not directly relate to my book on Carl and Madonna, I sorted the letters by author, placed them in acid free sleeves, and returned them to my aunts.

After I began writing The Oak Lovers I realized historical fiction is my calling and regretted my haste. It’s true that the letters all date to well before the book I’m working on and only one was written by someone in my own family, but someday I’ll finish this book and need new characters, new stories. I asked for the letters back, explaining that they really should be scanned, transcribed, and footnoted rather than just preserved. The family agreed, relieved to hand that task, along with the letters, back over to me. All are curious about what they contain, but none has taken the time to decipher them. I suspect I’m the first person in generations to read them.

Over the last couple of months I’ve transcribed over half of them in my spare (HA!) time. Most are written by teenaged girls and are full of school-girl crushes and gossip. What makes this remarkable, other than for the idea that a teenager is a teenager no matter the century, is that most girls had little or no schooling in the 1840s. Yet here were a circle of girls, all Quakers, most from rural farm families, who were clearly well educated and widely read. Their handwriting was a work of art and their prose more refined than most college educated people today. 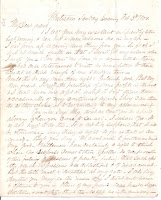 There are two friends of Martha’s I find particularly interesting. The first was a young gentleman named Charles Scholefield. As he was neither a relation nor a suitor, it is odd that a correspondence was allowed between them, yet sixteen of his letters were saved. After a little digging I discovered that the same Charles Scholefield who filled pages with romantic descriptions of sunsets or treatises on why the white men were wrong to treat the Mohawk so poorly, became one of the first legislators from . He was a celebrated lawyer, very handsome, married a seventeen-year-old at the age of forty, and was a Major in the Civil War.

Within a paragraph of my first letter by Amanda Akin, I knew I had found a friend. I should die of despair if I was obliged to write a formal, sentimental letter, she writes. What I wish for in a letter is the picture of my friend’s mind. I want to know what she is doing and saying, to have her show me the inside of her heart without disguise. I have this feeling when I write letters. If I seek wisdom and lofty sentiments, I can find them in books. 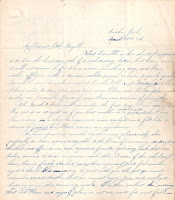 a girl who was both of her time and somehow beyond it. She doesn’t hide behind formality in her letters. She’s frank, teasing, feisty and, most importantly, relatable. She has a distinct voice – every writer’s dream. Within the last few days I’ve discovered snippets about her remarkable life. I won’t go into great detail, as she may very well end up a character in a future book, but I will say that the Civil War, Walt Whitman, and Abraham Lincoln come into play.

Amanda would little have imagined when she penned her “epistles” that Martha’s 3x great-grandchild would wish that she had followed through on her threat to write the name of Martha’s crush on the top of each page to prevent her from showing the letters to anyone.

Each letter offers a glimpse of the past that, at most, only a handful of people have ever seen. For a historian, there’s no greater pleasure than such a discovery. For a writer there’s nothing more inspiring than hearing a voice so clearly in your mind that you simply must know the speaker. I would never have heard this one if it weren’t for the five generations of pack-rats that came before me, each one of them finding the letters and making a conscious decision to save them. I carry on the family tradition with pride.