Some time ago I read Stephen King's essay: What Stephen King Does for Love. King explores the concept of why English teachers continue requiring students to read certain books. Is there any benefit behind forcing literature on students that might ultimately morph them into kids who dislike reading? King lists some of the novels forced on him and admits to not really reading them all--and then later re-visiting them as an adult. Some he still detested; others he discovered a new-found appreciation for.

Like King, I suffered through some books I was forced to read (and others I read Cliff Notes on), while I was also allowed to choose some personal selections. Ironically, some were written by King! And I revisited The Scarlet Letter a few years ago and still couldn't get through it.

After watching my two teenagers struggle through required reading lists, I'll admit to having mixed feelings about their assignments. I think some titles are important for kids to experience and deserve a place on The List of Books All Kids Should Read. But I'm in favor of mixing in some current titles along with a few classics and then letting kids choose titles of their own liking as well.

When I asked one of my sons, of the books he had to read for English, which ones did he enjoy, the only title he liked was To Kill a Mockingbird. (I bought him two books for Christmas and when he opened them he said, "You know I don't like to read." I'm still hoping...) I'm not sure if having to read titles has made him a reluctant reader. Or if he got to choose what he wanted to read if he might be a more ambitious reader. 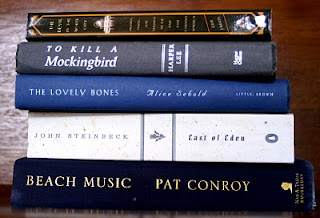 Here's my list of books I'd have my English students read:

Interesting discussions could focus on the settings: Lee's Alabama in the '30s vs. Stockett's Mississippi in the '60s. Just how different were the times and how have they changed? And is there a new set of prejudices brewing toward other races today?

When it comes to teaching kids POV, Stein's story--told from the family dog's point of view--is a perfect choice. Many novels feature one or two viewpoints, others manage to weave in a handful. But Stein chose to show the unraveling of a young family as observed by the insightful, intelligent, race car-loving dog. The story is captivating and funny as well as heartbreaking and a new favorite of mine.

Another unique POV angle is Sebold's novel told by recently murdered Susie Salmon. Susie watches her family and friends deal with the aftermath of her killing--an interesting and seldom seen approach to a story.

Teaching kids about literary devices--foreshadowing, metaphors, imagery, and more--can be achieved by these two amazing authors. I chose these two titles because they are the ones I re-read and enjoy each time. I even began flagging all the lovely phrasing and word choices in Beach Music the last time I read it--and gave up after about chapter two because I felt bad for wasting all my boys' Post-It flags. Conroy is also one of a handful of authors who can simultaneously inspire and deflate me. As a writer, how do you even hope to write as eloquently as he does?

My least favorite subject in school was probably history. As an adult, I was pleasantly surprised to discover historical fiction. Here was a way for me to learn about history without having to memorize dates and boring facts. Year of Wonders captivated me by the story of fictional characters who lived and died during England's 1666 plague.

The Devil in the White City follows a serial killer who caused mayhem during the 1893 Chicago World's Fair and also profiles the architect behind the fair. Larson's Isaac's Storm (about the deadly hurricane in Galveston in 1900) would also be a good choice.

Gregory is an historian and writer who deftly weaves a story of greed and lust about the sisters who clamoured for the attention of King Henry VIII. While authors take some liberties with details, since they must add in the dialog and details to help weave their stories, historical fiction should be approached as fiction based on history without spending too much time debating facts and timelines. This is an English class, not history. These titles were chosen for the quality of the story telling--not necessarily because they are the most accurate in retelling history.

I'm going to stop now and not delve into fantasy, memoirs and other categories as this post would run too long. But this would be the starting point for my students. I chose books I've read and loved and, since I am always discovering new treasures, I'd encourage my students to introduce me to books they also have enjoyed. Because that's what literature is about, right? Falling in love with a story that creates a desire to read more and more and more...
Posted by Pamela Hammonds at 4:47 AM

Email ThisBlogThis!Share to TwitterShare to FacebookShare to Pinterest
Labels: Pamela Hammonds, Stephen King, The Art of Racing in the Rain, The Help, The Other Boleyn Girl, To Kill a Mockingbird, Year of Wonders