To explain this puzzle, I must start at the beginning.

In December of 2005, in a car moving about 80 miles per hour through the middle of the night and the middle of Arkansas, I had a vision of a bootlegger, a dying black girl, and a monk.

We were on our way back from Kentucky, where I spent time with my extended family for Christmas. My daughters were sleeping in the backseat and my husband was driving. I found some paper and a pen, and I scribbled notes as we crossed the Texas state line. Before we got home to Ft. Worth, I had the basic outline on a memo pad for The Angel's Share, an epic tale covering three generations of Kentuckians, maneuvering through the civil rights movement, the bourbon industry, and this family's struggle with religion. 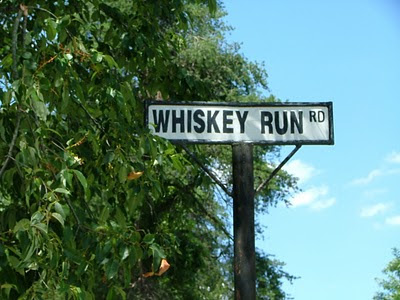 It was more than a short story or a historical view of Kentucky's bourbon industry. It was The Big One--it was the story I was meant to write. I was struck by some sort of divine purpose--this was The Book and I was The Author. Looking back on it now, it all seems rather silly, this journey I agreed to undertake. Yet at the time, I felt as though I had found my calling.

Now, perhaps, I should tell you that even though I had written for newspapers early in my career and have kept journals for my entire life, I am not really a writer. In 2005, I was actually a sales manager (working 65+ hour weeks), a wife and a mother. My lifelong dream to be a journalist had fallen by the wayside long ago when I chose to pursue money instead of art. Yet somehow I thought that I could do this. I was still a writer, I surmised, as long as I actually sat down and chose to write.

By March of 2006 I had compiled three notebooks full of character studies, plot and themes for the novel. I was writing random scenes, some from 1950, some from 1968, and some the present day. I kept it all in notebooks so that it was always with me: my lunch hours, my early mornings, and any moment I could squeeze in a new idea. By 2007 I was realizing, as my notes and scenes grew to six notebooks, that I needed to get it all on a memory stick and start typing. By 2008, after job changes, lots of travel, and a crazy life, I started thinking seriously about stepping back from my career to focus on writing and my daughters. In December of 2008, I resigned as vice president of an Internet marketing company. NOW--I thought, now I will have the time to complete The Angel's Share.

The year 2009 was full of transition. 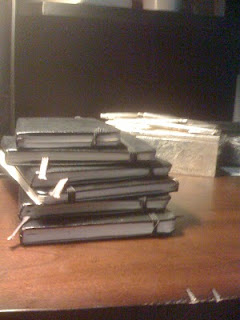 I joined writers' groups, helped create this blog, started my own blog and attended writers' conferences and retreats. I toured (again) the Kentucky Bourbon Trail and visited the Abbey of Gethsemani to see where my fictional monk would have lived. I took a sales job to maintain some income but nothing like the pace I had before, thinking that I could dedicate my time and energies instead to The Angel's Share. I started putting it together and was surprised that it made sense. I was on my way!

Then I realized that I knew nothing about writing a novel. I knew nothing about agents, publishers, query letters and editors. I had no idea that there were hundreds--no thousands--of people right here in the DFW metroplex who had the same dream that I had--to become a novelist. I looked at The Angel's Share and decided it was too much. I took it apart. I put it back together. I promised myself I would finish it, then I would swear it off for weeks. It began to look like a jumbled mess of ideas, scenes and dialog. It lacked cohesion. It felt chaotic. I loved it and I hated it. It was wonderful and it was terrible. But more than anything, it wasn't finished.

It is 2010 now. I have the notebooks and memo pads, I have a memory stick full of 18 files of revisions and I have 50,000 words on paper, but it still is not complete. I can spread everything out--the notes, the photographs, and the mementos of my field trips, but they don't create a completed puzzle. They are all still pieces. And so now, with January almost behind me and a new career with a non-profit organization in front of me, I have to make some choices about what to do with my jigsaw. Do I keep carving out the pieces, hoping they will all snap together in the end? Do I solicit the help of an editor or another outside eye for more feedback? Or do I put it on the shelf and let it marinate in its own stew as I continue to think wistfully about what could be?

My answer, I think, lies in throwing away the excuses and setting goals to make it to the finish line. I'm almost there! Considering the demands and travel of my career, I'm not ashamed of the time it's taken me to write The Angel's Share--I see it as a testament to my commitment to the project. And now, sitting on the ledge looking down on 2010, I see great possibilities for my manuscript. I can see the light at the end of the tunnel and it's not that far away. I've got no more excuses... so for now, signing off. I've got a novel to write.
Posted by Susan Ishmael-Poulos at 9:27 AM