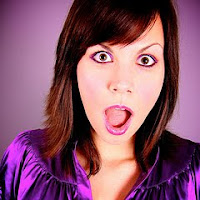 Many writers and writing instructors say, "Have your character do something out of character. Something that totally surprises."

I have to agree and disagree.

Have you ever read a novel where a character did something so diametrically opposed to your perception of her based on the author's development that you simply couldn't wrap your mind around it? Were you able to suspend disbelief up to that point, but after that, you read the rest of the story with one eyebrow cocked and a great big "Whatever!" at the end?

It hasn't happened to me often, but a few times, I just couldn't get on board. It also prevented me from digging into another novel by that author quite so eagerly.

Yes, allowing your character to venture out of her comfort zone can be an excellent way to really get your story moving, to create an additional layer of conflict and suspense. If your character digs herself into a wacky hole, then proceeds to find a way out again that seems reasonable, or your reader is – at the very least! – left with the sense there's hope she can prevail, your reader can live with it.

If your character, however, does something so foolish or contrary to her personality there's just no way to set her right again, your reader might just throw her and your book across the room and leave them both in the corner to grow icky cobwebs.

I propose a real-life approach to dealing with unusual character behavior: Give your characters a waiting period, a so-to-speak "cooling off period" when they want to do something out of character.

As each of my fairly calm, well-behaved, and relatively conservative children has approached young adulthood, he or she has challenged me in ways I wasn't completely prepared for. I've found that children, like the characters in my stories, sometimes need waiting periods when they want to do something outside the box.

My son wanted a tattoo as soon as the mainstream craze for them began six or seven years ago. I told him he could wait until he was 18 and had the money to do it himself. I refused to give permission for something that was more or less permanent and might not represent who he was as a person by the time he really figured that out.

See, if I'd given him permission to go for it at age 16, he'd have guns tattooed on his biceps.

He was convinced he'd think they were as amazing 30 years from now as he did at age 16. I could see the humor in it – his biceps were pretty scrawny, and he thought the guns would lend them an air of authority.

Three years later, he had a tasteful quote tattooed in an unending circle on his forearm – ". . . and I can no longer tell where you end and I begin . . ."

And I suspect 30 years from now, that will still be true for him, whereas he might be hiding guns on his biceps with duct tape. Though, I don't know, they might make interesting nursing home conversation as all the old folks compare the idiotic tattoos they got in their youth.

(By the way, I'm seriously praying I don't see any puckered, sagging, and stretched-out tramp stamps when I'm in my wheelchair. "NO! I do NOT want to see what you did to your rear end when you were 18! GET IT AWAY!)

So, child one was safely raised and tastefully tattooed.

Then my daughter decided a few months before her 16th birthday she couldn't live without a tiny stud in her nostril. In Texas, a parent of a child under 18 must be present for such a piercing. I wasn't quite as opposed to this scenario as the tattoo. I figured a tiny hole in the nose would heal over rather quickly if she changed her mind down the road.

However, I still gave her a waiting period. I said, "In 90 days, if you still want to do this, we'll talk about it again." Well, 90 days came and went, she asked my permission, and I gave it. Then she decided the forty dollars she'd saved for the piercing was better spent on something else she wanted more. I wasn't disappointed, but suspected it wasn't the last time I'd hear about it.

Sure enough, a few months later she came to me again. She had the money and wanted to do it. I fulfilled my end of the bargain, dutifully accompanying her to a surprisingly decent piercing and tattoo parlor near our house. (It used to be the florist where my son purchased all his prom and homecoming corsages – talk about a weird feeling walking in there.)

By the way, I have one bit of free advice if your daughter wants to get her nose pierced: DO NOT WATCH. I promise.

But, she's got the little sparkly stud and it doesn't look half bad. Her friends all think she has a super cool mother. And I'm still lightheaded.

I can't wait to see what child number three has in store for me!

And there's a moral to this story:

DO surprise your reader. DO allow your characters to get themselves into frequent and glorious messes.

But if they come begging to do something you know they'd never do, give them a cooling off period. If, after you've distracted yourself for a while with some other aspect of your writing, they're still clamoring to do that ridiculously foolish thing, and you have a reasonable idea how you can rescue them to your reader's satisfaction, go for it!

If you can't think of anything but your character down that well, beaming her pretty little messed-up face back up at you, still begging you to rescue her, just say no.

Your readers will thank you.

Email ThisBlogThis!Share to TwitterShare to FacebookShare to Pinterest
Labels: Julie Kibler, jumping the shark, Out of character, writing lessons