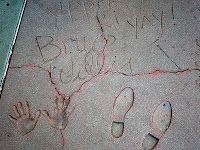 Flash back to 1999. I’m about to leave to see a newly-released movie and make the mistake of telling my niece where I’m going. “Oh, I saw it,” she said. “It’s so good. Bruce Willis is actually dead through most of the movie and no one knows it but the boy.”

Now, I’ve never slapped a child but, to this day, the temptation remains. She completely spoiled the movie for me. Consider me a fast learner when, eleven years later, I didn’t tell her I was about to see Shutter Island or The Book of Eli. Possibly she’s outgrown her urge to spoil the endings of movies, but I took no chances. I’ll get her back one day.

Children possess an innate quality that overrides their need to be surprised. When my boys were little, I read an article that advised parents to reveal the ending of a book or movie if a child seemed anxious about the outcome. They’d rather know that My Dog Skip will live through his shovel-beating than wait for five torturous minutes while the vet decides his fate. This explains their ability to watch the same movie repeatedly and still be entertained. If you don’t believe me, I have TWO well-viewed copies of The Lion King as proof.

But adults are not kids (well, I know a few…) and we’d rather be surprised at the outcome of a story. If we choose to see a movie twice (or ten times—Notting Hill anyone?) or re-read a book, then we’re obviously enjoying elements other than the twist at the end.


Anita Shreve’s The Last Time They Met remains a favorite of mine for shocking me when I got to the ending. I recently re-read it to study how she pulled it off. Harlan Coben is a master in the art of surprise endings. I almost never figure out the endings of his great novels. Correction, I’ve never figured one out.

In my current manuscript, WAITING TO KNOCK, my ending reveals something I’m betting readers won’t see coming. I’m even selectively telling only one critique partner, so I can judge if the idea really works.

When I’m ready to query agents, I’ll need to pay close attention to each one’s submission guidelines. Some want only a query (which should entice them to ask for more); others want sample pages or a synopsis. For example, after the initial query, Nathan Bransford wants everything!

In his blog posts on synopses, he writes: …you definitely want to capture how the novel begins and the hook and include all of the major climaxes and the big climax at the end.

Nathan suggests reading book jackets for inspiration. They stop short of revealing the ending and set up the story in hopes of hooking you in as a reader. But in a full synopsis, you’ll want to show that you’ve been able to take a great idea and wrap it up in one compelling conclusion and prove the story doesn’t fall apart along the way.

Literary agent Rachelle Gardner writes in her submission guidelines to NOT tell her the ending. WordServe Literary’s website states: For fiction, don't give a synopsis of the whole book—just tell us enough to make us jump out of our seats and yell "I must read this book!"

Perhaps a child at heart as well as an eternal pessimist, Harry, in When Harry Met Sally, always read a book’s last sentence first. That way, if he died before he finished reading the book, at least he’d know the ending. I'm taking a cue from him when I flash forward to 2013. I’m about to give my niece a first edition, signed copy of WAITING TO KNOCK. “You’ll love it, Ashleigh. Here, I’ll read you the last page.”