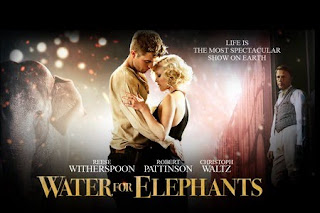 Last night, four of us from What Women Write attended a special pre-screening of the highly-anticipated movie, Water for Elephants, the screen adaptation of Sara Gruen’s runaway bestseller by the same name.


Let me make it clear: I loved it.

Today I read several glowing online reviews of the movie and one terrible one. It called it predictable. It called it clichéd and happily-ever-after. As I read the review out loud to my mother-in-law we laughed and nodded. Maybe the characters were less complex than say, Hamlet. Maybe the antagonist seemed a little too terribly terrible. And maybe the critic was right: this love story didn’t change the world. But as a film? It hit the mark.

As I watched the movie, I cheered for the protagonist. My heart was racing at the climax of the story, even though, since I’d read the book, I knew what was coming. I felt invested in their success. And I cheered when the ending gave me what I wanted.

It got me thinking of my own “big reveal”--how does each story end? We’ve all read novels where we toss the paperback across the room at the finale, disgusted with the choices of the main characters at the closing of the novel. Sometimes the author gives us too little, too late, leaving us dejectedly wanting more. Yet other times the writer may be ridiculously over-the-top with added drama that doesn’t resonate as true. We’re allowed to be disappointed. After all, we’ve invested in these characters. We need the ending to hit a sweet spot of satisfaction, tension and drama.

I am at that point with the ending of my manuscript: struggling between a nice and clean closing or adding an element (or two) of chaos to the scene. And then, where do I leave them? Is there such a thing as too-happy of an ending, what the critic alluded to in his review of Water for Elephants? I have thoughts for my characters' conclusions, yet they seem to want to tell their own story. Where I’ll land, I think, is somewhere in the middle of my characters' desires and my own, hoping to disappoint no one, and hoping to be true to the souls of the characters I’ve created.

And yet therein lies the rub. In my hopes to disappoint no one, I may be missing the point entirely, which uncovers my biggest terror regarding writing to begin with: somebody’s not going to like it. Someone may even...gasp...hate it. Agents will toss it back, unimpressed. And if it does see the light of day, I’ll surely get reviews that tell me I am clichéd and over reaching, or boring and predictable. Hopefully, it will resonate with most readers, and those that check the "like" box will outweigh any "thumbs down" I may receive. As far as pleasing everyone? Fat chance for me. All I can do is end my manuscript pleasing myself, and telling the truth. Maybe my big reveal will knock your sock off. And then again, maybe it won’t. Maybe my skin won’t be thick enough to handle criticism.

But I won’t know unless I try.
Posted by Susan Ishmael-Poulos at 4:26 PM