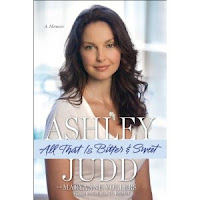 All That Is Bitter and Sweet, the new memoir by Ashley Judd, was released last week. I'd pre-ordered the hardback online (after a few moments of debate: Did I want it on my iPad, or the real, old-fashioned paper version?) and it arrived on Wednesday, one day after its debut in stores. I began reading it immediately.
I feel a great kinship with her because we are about the same age, with Eastern Kentucky roots, are both UK basketball fans, and both consider relief work in Africa (and for her, around the world) our calling. But the book isn't really about Ashley Judd/Movie Star. And it is not about abuse and neglect, even though her childhood was splattered with both. Her memoir is about the women and children she's met around the world who do not have a voice. Riding tandem to their story, is hers. It's about bridging the decisions others made to shape your childhood across to your adult actions, and shaping your present existence by your choices, and not your circumstances. Ashley Judd has choices as an adult, regardless of her childhood. The women and children she meets around the world do not have that same choice.
The media has taken Ashley Judd's story and made the headlines about abuse. Yet, if you read it, you see that it is about grace and faith. It's about compassion for people whom the world has thrown away. Her own journey shaped what landed her in the brothels of Cambodia and the AIDS-ridden streets of Nairobi. The memoir transcends her childhood and tells the story of a woman she became, and is becoming today.
Ashley Judd's childhood was unconventional at the least, and full of neglect and dysfunction at the most. But the arc of the story is based on the choices she made: to pursue a career in Hollywood, to leave it for a farmhouse in Tennessee, and to grow branches that would reach people in dire situations around the world, hopefully leaving this planet a better place because she was here.
I'm reading a friend's memoir-in-progress right now and urging her to both tell the truth and to clearly show the character arc from wounded child to triumphant warrior. What I mean by that is this: how does the main character expand? How does her empathy, compassion and world-view change as she moves through her own pain to find peace? And why, overall, will the reader care?
If you are writing memoir, the reader must not only connect to the brokenness of who you were, but celebrate who you have become. Perhaps readers won't agree with your choices or methods, but they must understand them and, as they close the pages of the book (or close the application of their e-reader), they need to see the world a little differently because you told your story.
Everyone has a story, and you don't have to be famous to write a great memoir. You just need a lovable lead character, a story to tell and courage to tell it.
Posted by Susan Ishmael-Poulos at 7:00 AM