If you have lunch with Kay Thomas, be prepared to eat a lot, especially if you go to an all-you-can-chow salad bar place. Because you'll be there a long time--not because she holds you hostage, but because you won't want to leave. 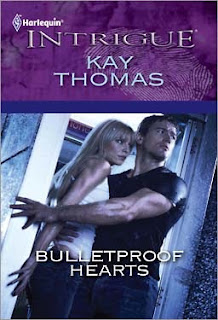 Kay, who is a neighbor as well as a four-time author, met me for soup and muffins and lots o' salad a few weeks ago, ostensibly to talk about her latest novel Bulletproof Hearts, the fourth in her Bulletproof series published by Harlequin, available since Friday on e-book and in paperback tomorrow. But before she said word one about her novel, she asked about my kids, my writing, my life. Anything you've ever heard about published novelists being above the groveling queries (and honestly, the horror stories I've heard are mostly Internet rumor; real life has proven much more generous) is put to shame after two minutes with Kay. This is a writer who is glad for where she is, but remembers what it was like, and is encouraging to those who hope to join her in publication.

And she had some great advice, as well as uber-hopeful information. Maybe the best advice she offered, without taking credit for the idea, was to "write like your mother is dead." Remember, this is a woman whose publisher is Harlequin and, if you have any doubt that some blushing might have occurred as she worked, all you need to do is take a look at the cover. (Or page 67, sorry for the spoiler.) The copy Kay provided for our giveaway has steamed up my office for the past couple of weeks. Write like your mother is dead--in other words, you have to let go, and abandon yourself to what is true. Putting it in those words is somehow freeing, whether the scene you imagine involves salty language or a lack of clothing or simply your character behaving badly. The reader you write for probably isn't your mom (or dad, or kid, or spouse), and in order to be completely true, it might be necessary to abandon any idea that they might one day read it. Even if they will.

(I took a break here for another crock of soup. French onion.)

The informational nugget that brought the most hope to me, a writer with a couple of books stashed under the proverbial bed, is that those books don't always stay tucked in. Kay's first book, agented and shopped, ended up lounging on her bedroom floor as she wrote another and another, both successfully published, and then emerged to become Better Than Bulletproof, the third novel in the series. True, she said, it was a lot of work, a lot of revision--but for those of us with a first baby sleeping quietly in the house, it's heartening to hear he might indeed one day walk. Now, some first novels are learning ones, books the writers know will never see publication. I also know a number of writers with good first efforts that just didn't quite fly for any number of unknown reasons. (The frustrations of querying!) For those folks, it's good to know the manuscript might yet have legs. The lesson to take from Kay, of course, is to keep on writing; if she hadn't, then that first love project would probably still be fodder for dust bunnies. (Not to accuse Kay of dust bunnies.)

Kay, not the glutton I am, sipped her iced tea. I peppered my salad, then peppered her with some rapid fire questions and chowed as she answered.

What's the now-published equivalent of the thrill of querying, I wondered, recalling the zing of my spine when my inbox featured the name of an agent I'd emailed. Kay told me the calls from her agent when a sale had been made offer the same adrenaline rush. And when she gets the first glimpse of her cover, and when good reviews come in. "And fan letters!"

Then, proving that like a good book there's a lot more to her than just what the first impression might suggest, she added that there's always something thrilling--but that there's also always something going on, not always fun and games. "Like always having homework," she said. "So enjoy the process," she added, as she does, because while getting a book published is a lot of fun, it's also a business, and the joy, for her, is in the writing.

"So do you write in your jammies?" I asked, stuffing down a forkful of lettuce and almonds, playing to the cliche. And guess what? Most of the time, she said, she does!

So what is the hardest part for you? I asked, buttering up a blueberry muffin. (Did I mention I'd made a quick return to the buffet while Kay helped herself to more tea?) And what she told me was it's making decisions. If she chooses something for a character, it means un-choosing a hundred other things, and just as with life, it can bog her down. When faced with the different paths her protagonist can take, Kay admits she can get bogged down, and is often tempted by the harder, more involved choice. Which means heavy editing, since she says she tends to write long already, maybe a hundred thousand words that get pared down to 60K for the final product.

Which led me to ask, through a mouthful of (another) muffin, how long does she take to write a draft? (This comes from someone who does not, as of yet, write particularly fast.) It depends, she said, and that makes sense; this is a mother of two, a wife, a daughter. But she did recall she pumped out 88,000 words in just 11 weeks writing Bulletproof Texas, her second book to hit the shelves. Being on deadline didn't hurt, she added. Again, she slimmed the manuscript to about 60,000 words.

(Slim, I thought, then grabbed another bowl of soup, split pea this time.)

So many words! I said. Does it just kill you to get rid of them? No, she said, because she doesn't completely. "Undiscarded brilliance!" she said, explaining she keeps a file labeled as such so she doesn't have to trash the thousands of words that don't make the final version. What do you know, I said. I call mine "Darlings." As in, kill them, thank you, Stephen King.

So what else? I asked, and she finally eased my shame by helping herself to some dessert. I stayed put, worried that after three hours and uncountable trips to the buffet, management would throw me out if I dared serve myself even one more crumb.

Do your kids brag about you? Yes! How do you start a new book? She spends some time getting to know the characters, which accounts for a lot of the words that never make the book, and then one day--her fingers hit the keyboard with the real story. How many drafts does she go through? She writes in layers, she says, so after the first draft is done, she lets it sit a week or so, then adds in more layers, making sure each chapter propels her story forward, adding in details as needed. She says it's probably six or seven drafts by the time she's done, but the subsequent ones aren't as labor intensive as the first draft. Layers. Like her ice cream, which I kept staring at, chocolate and vanilla and were those brownie crumbles on top?

All right. Quit staring at the woman's dessert. I glanced at my watch, gasped at the time, and reached into my purse to grab the notes I'd jotted earlier to make sure I hadn't forgotten anything. "What's the weirdest thing in your purse?" I asked, last question, I promise. In addition to the usual suspects, she pulled out a folding fish fan, a cool tissue holder, and headphones in a tin. A clear plastic Container Store-style zippered bag held lip gloss and bottle of nail polish. My purse? Two peppermints and an unpaid traffic ticket.

Win a signed copy of Bulletproof Hearts by commenting here! WWW will do a random drawing on Friday, April 8. Be sure to include a contact email address if you want to be entered.
Posted by Elizabeth Lynd at 6:00 AM