We devote a lot of space on this blog to promoting authors and the craft of writing fiction. Today I thought I’d detour a bit and talk about writing nonfiction—articles, Web content, features—as a means of building a name for yourself, getting bylines, making a little money, or for whatever motivation you choose.

For the past dozen years or so, I’ve worked from home as a freelance writer/editor. I have a degree in marketing but no formal writing education other than some wonderful English teachers and professors who encouraged me along the way. If you’ve wondered how to get articles published, I’ll share how I got started.

CLASSIFIEDS I happened to be reading the want ads in the St. Louis Post-Dispatch one Sunday morning and found a listing for a stringer. Part-time, work from home, covering the Illinois county where I lived. I sent off a résumé and assumed I’d never hear anything since I didn’t have journalism credits. But someone called and, for the next two years, I wrote the High School Focus page and wound up with about four published articles a week plus photos—a decent income and hundreds of bylines to my credit.

VOLUNTEERING It’s not hard to find volunteer work as a writer. After my newspaper stint dried up due to budget cuts, I found myself helping out at church, writing the weekly bulletin. After a few weeks, the church started to pay me. A few weeks after that, a member of the pastoral staff approached me about a religious paper in need of an interim editor, and that became my job for nearly two years. From volunteer to paid position in about a month plus editing credits now on my résumé. I’ve also been paid to write a school district newsletter and some education promotional pieces. Sometimes, you just have to ask if there’s a need.

REGIONALS After moving from Illinois to Texas, I spent a few months solely writing fiction before deciding it was time to contribute financially to the family coffers and began poking around for venues. I sent off some essays and ideas to some regional parenting magazines, but came up dry except for a couple that didn’t pay much. (You can find a listing of these here and, if you get in with some of the bigger ones, you can make a little bit of money; submit the same article to many, as long as you retain reprint rights, and you can end up with a decent return on your time.) I also contributed to a local women’s magazine for a short time before it went out of business. And I started a personal blog as a means to keep an online journal and found it a great outlet for trying out essays. 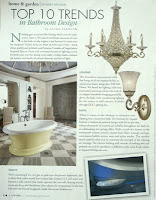 Then I found a regional lifestyle magazine delivered to my house each month that looked as though freelance writers contributed to its content. So, I emailed the editor to inquire about submitting. No response. I followed up with a phone call. This time I had better success and, after sending her some writing samples and my résumé, she gave me an assignment. Now, in my fourth year of regular assignments, I’m also editing for the magazine as well.

So many times we’re cautioned not to pick up the phone but, had I not followed through on my initial inquiry, I wouldn’t have found this awesome job that I continue to enjoy. Nor would I have met some wonderful people—some of whom have hired me to write marketing pieces for them.

ELSEWHERE Although I’ve yet to explore these options, I have had friends pass along writing opportunities they’ve seen posted on Craig’s List and other sites. I’ve known people who’ve gotten leads via Facebook and other social networking sites as well. I mentioned volunteering and, although I know your time is precious, you can accept small projects and you never know what might spring from those. Also, it’s good to offer your expertise to nonprofits. Even if you never make a dime, it’s great to give back.
Posted by Pamela Hammonds at 11:59 AM