An Interview with Kristina McMorris 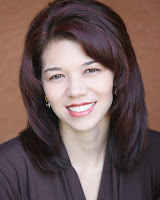 Over the last month or two, I’ve become acquainted with Kristina McMorris through Facebook and Writer Unboxed, and I am delighted to welcome her to What Women Write today.

As many of you know, my current work in progress deals with the lives of my great-grandparents, so when I heard that Kristina’s debut novel, Letters From Home, was inspired by her family history, I became interested in seeing how she pulled it off.

Don’t be fooled by the sweet, nostalgic cover. While the story has elements that are both sweet and nostalgic, and the audience for the book would mainly comprise of women, Letters From Home is as much a war story as a love story. Readers will see not only the hardships faced on the home front, but they will also witness the horrors of the war from both a man’s perspective (in the trenches of Europe) and a woman’s (in a hospital in the jungles of the Pacific.) This is a rich novel with lovably flawed protagonists and a strong cast of secondary characters.

If you enjoy bittersweet love stories filled with people you’ll miss after the final page has been turned, or you’re simply a fan of the World War II era, Letters From Home will surely fit the bill.

About Letters From Home (from the book jacket):

Chicago, 1944. Liz Stephens has little interest in attending a USO club dance with her friends Betty and Julia. She doesn’t need a flirtation with a lonely serviceman when she’s set to marry her childhood sweetheart. Yet something happens the moment Liz glimpses Morgan McClain. They share only a brief exchange—cut short by the soldier’s obvious interest in Betty—but Liz can’t forget him. Thus, when Betty asks her to ghostwrite a letter to Morgan, stationed overseas, Liz reluctantly agrees.

Thousands of miles away, Morgan struggles to adjust to the brutality of war. His letters from “Betty” are a comfort, their soul-baring correspondence a revelation to them both. While Liz is torn by her feelings for a man who doesn’t know her true identity, Betty and Julia each become immersed in their own romantic entanglements. As the war draws to a close, all three will face heart-wrenching choices, painful losses, and the bittersweet joy of new beginnings.

A weekly TV host since age nine, Kristina McMorris has garnered more than twenty national literary awards since writing her debut novel, Letters From Home (Kensington Books, Avon/HarperCollins U.K.). This WWII love story, inspired by her grandparents' courtship, has been hailed as "ambitious and compelling...[a] sweeping debut" by Publishers Weekly. Book club rights have been sold to Reader's Digest and Doubleday, and the film rights are represented by the renowned Creative Artists Agency (CAA) of Los Angeles. She lives in the Pacific Northwest with her husband and two sons. For more, click here to visit Kristina's website.

WWW: Welcome Kristina! I’ve read that the inspiration for Letters From Home is tied to your family history? Can you tell us a little more about that?

KM: I'd love to! Several years ago, I was creating a Christmas present for the family, a self-published cookbook featuring recipes my grandmother had collected and created over decades. While interviewing her for the biographical section, she began to talk about her courtship with my late grandfather. That's when I discovered, much to my amazement, that they had dated only twice before getting married. Apparently, their relationship had developed almost entirely through an exchange of letters during World War II. Grandma Jean then retrieved from her closet a gorgeous stack of those very pages, each one full of romantic and heartfelt messages.

Needless to say, long after leaving her house, thoughts of their letters lingered in my mind. And soon I found myself wondering how different their relationship might have been if their correspondence had been anything less than truthful. This became the core idea of LETTERS FROM HOME.


WWW: While you fictionalized the main complication (other than the war) keeping Liz and Morgan apart, did you give either of them any of your grandparents’ traits?

KM: I did, which is really what makes this story special to me. Bits and pieces of their personalities are sprinkled throughout the book and in several of the characters.


My grandfather, whom I called "Papa" (as Liz does with her own grandpa), served as a navy signalman on a destroyer escort like the character Christian, yet like Morgan, he was also an Iowa farm kid with dry humor and good looks stemming from his dark-Irish roots. His penchant for limericks and card playing I gave to other GIs in the story, and the female tattoo on his forearm, which my grandfather used to make "dance" by wiggling his knuckles, went to the soldier named "Boomer" (my grandfather's nickname).

As for my grandmother, like Liz, she worked in a nursing home as a teenager. Also, the Midwestern adages from the character Viola (e.g. "slipperier than a log in a mill pond") are from my grandma, whose full maiden name, Irma Jean Cordell, is divided among three various characters. And yes, I even borrowed a line or two from my grandmother's collection of love letters.


WWW: Your secondary characters (Julia and Betty) are well-rounded and sympathetic. Where did you get your inspiration for them? Betty’s situation, in particular, must have required a great deal of research.

KM: Poor Betty; she's such a lovable train wreck, isn't she? Even as the author, it's hard for me not to laugh and shake my head whenever I hear her name, thinking back to what trouble she always somehow created for herself. To pen her scenes—serving as a nurse's aid in the jungles of the Pacific as part of the Women's Army Corps—I did do a large amount of research. The most helpful resources were memoirs and the amazing archivist at the U.S. Army Women's Museum.

As for Julia and Liz, I'm so happy you enjoyed them. I think my own traits went into creating Liz more than any other female character, namely because she's an independent, career-driven woman ahead of her time, which makes her very similar to women in today's society. Julia was inadvertently inspired by a combination of my dearest friends who have faced the dilemma of choosing motherhood over career aspirations. As a mom myself, I certainly understand the constant challenge of finding a healthy balance between the two.

WWW: Several of your characters have absent or deceased parents. Is there a reason for this?

KM: Well, perhaps now is a good time to vent my secret and evidently violent grudges against my mother and father…LOL. (Be sure to ask me this question again after you read my second book!)


Aside from creating a plausible way to allow three young, single women to live together without parental supervision during the 1940s, the loss or absence of the characters' parents plays a vital role in many of their struggles with identity, trust, independence, and unresolved issues (and isn't that ALWAYS the source of those issues for us?!).


WWW: Which character remains closest to your heart, and why?

KM: You had to go and ask which child I love the most, didn't ya?


Honestly, there isn't a major character I really favor over the others, but when it comes to the rest of the cast, I'd have to say that Cora, Christian and Ian's mother, has a special place in my heart. Imagining what it would be like to send my own two sons off into the service really struck a chord. I found so much admiration in the strength she displays while her heart is quietly being broken by the reality that, due to the horrors of war, her family will never be the same.


WWW: Your prose is gorgeous – it’s hard to believe you did not enjoy reading or writing when you were younger. What changed your mind?

KM: Wow, thanks so much for the wonderful compliment! Blissful ignorance—thinking I actually knew what I was doing when I dove headfirst into this novel—was definitely my greatest ally. Once I realized what I'd gotten myself into, it was too late to turn back. So, I started reading like crazy; I had a lot of catching up to do.

I will add, though, that I was a longtime movie buff, which is why I see my books play out like a film in my head. In that way, I suppose there was always a storyteller inside of me waiting to break free.


WWW: The cover of Letters From Home may lead readers to believe the novel will be simply a sweet romance. Boy, are they in for a shock when you bring us into the trenches with Morgan. Are there any special vets who gave you a palette with which to paint such a vivid picture?

KM: Much of my research for the battle scenes came from memoirs and journals by GIs who served in the European Theater, since their descriptions and language were still somewhat fresh from the period when they put their memories on paper.


That said, one of the most rewarding experiences of this journey has been spending time with WWII vets whom I would otherwise never had the chance—or taken the time—to get to know. The first who springs to mind is Lynn "Buck" Compton, one of the famed "Band of Brothers" vets and a humble hero in every aspect of his life. Recently, I received an email from a book club comprised of nieces and daughters of the actual "Band of Brothers," who were reading my novel based on his recommendation, and I can't tell you how much their compliments meant to me!


WWW: Are you working on a new novel now?

KM: I'm happy to report that I've finished my second novel, BRIDGE OF SCARLET LEAVES, which is scheduled for release March 2012. The story features a female Caucasian violinist who secretly elopes with her Japanese-American boyfriend—against societal molds and families' wishes—the night before Pearl Harbor is bombed.


I'm extremely eager to share this one with readers, since it features some shocking aspects of history that most people have never heard about, as well as heroes who are too often passed over. Also, being half Japanese, I was able to infuse a unique perspective of living between worlds.


WWW: Many of our readers are aspiring authors themselves. Do you have any advice for them?

KM: Take it from an author who wrote an entire novel, having no clue that WWII women's fiction wasn't considered "hot" in the marketplace at the time: write from the heart, not to follow a trend. Above all, YOU have to believe in your work and, in particular, your voice. Don't let anyone edit out what is uniquely yours. When it comes to your literary career, be fearless! Strive for hearing "yes," rather than worrying about the "no's." And on days when doubts manage to creep in, drink a glass of vino, eat a few chocolates, then sit back at the computer and write the next chapter.

Thank you for stopping by today, Kristina! Letters From Home is available in bookstores everywhere. If you would like to see a video of Kristina talking about the story behind the novel, click here.


Disclosure of Material Connection: I received an advanced copy of the book mentioned above gratis in the hope that I would mention it on this blog. Regardless, I only recommend books I've read and believe will appeal to our readers. In accordance with the Federal Trade Commission’s 16 CFR, Part 255: “Guides Concerning the Use of Endorsements and Testimonials in Advertising” I am making this statement.
Posted by Kim Bullock at 5:00 AM